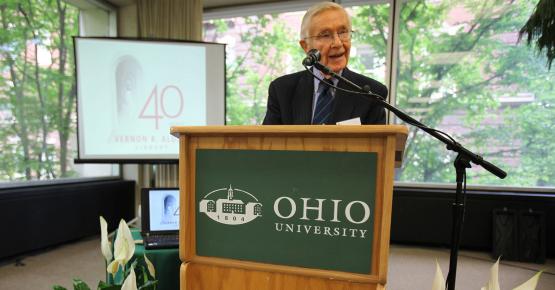 On Monday, June 22, Dr. Vernon Roger Alden, 15th president of Ohio University and strong supporter of the Libraries, passed away at the age of 97.

As the president of Ohio University from 1962 to 1969, Alden’s passion for transforming opportunity into forward-thinking action rarely went unnoticed. One notable collaborative enterprise was the critical rechanneling of the Hocking River, an essential initiative to the development of Ohio University and to Southeast Ohio.

His overriding goal was to create a university environment that met student needs while raising their levels of aspiration.

By March of 1964, two years into Alden’s career as president of Ohio University, President Lyndon B. Johnson appointed Alden as chairman of the Task Force Planning Committee of the United States Job Corps.

Alden also served extensively on the boards of the Boston Trust Company, Colgate-Palmolive Company, McGraw Hill, the Kendall Company, Digital Equipment Corporation and the Mead Corporation, and he was named the 1966 Ohio Crusade Chairman for the American Cancer Society.

As president of Ohio University, Alden’s contributions and accomplishments were plentiful.

Operating income, enrollment and annual gifts from private sources saw a large growth during his tenure. In addition to University Libraries’ Alden Library, which bears his name, Alden oversaw the construction of many new academic and dormitory buildings, a new airport and the Convocation Center.

Alden worked diligently to change the attitudes toward race relations held in the 1960s. His collaborative efforts with staff, faculty and students resulted in the establishment of OHIO’s Black Studies Institute. He also oversaw the establishment of such innovative academic assets as the Honors Tutorial College, the Cutler Program of Individualized Study, the Ohio Fellows and the Ohio University Press.

An important figure in enhancing the economic development of Southeastern Ohio, in April 1964, Alden announced the establishment of the Ohio University Institute for Regional Development, an organization formed to provide management and research aid to local industries to promote tourism and to develop community facilities.

Alden’s efforts did not stop there. In addition to improving OHIO internally, Alden worked to promote Ohio University as an internationally recognized institution.  He took leadership in acquiring OHIO contracts for the United States sponsored educational programs in newly emerging nations at that time, such as Nigeria and Vietnam, and planned for the training of Peace Corps Volunteers to work in Cameroon and India.

After leaving Ohio University in 1969, Alden joined the Boston Safe Deposit & Trust Company, where he served as chairman for nine years.  After his  resignation, Alden spent the next 10 years of his career in the public arena.

In the spring of 1978, Alden accepted an appointment from Massachusetts Governor Michael Dukakis to become chairman of the Massachusetts Foreign Business Council.  Because of his Japanese language skills and the connections that he had made while teaching management in Japan, Alden began his efforts to attract foreign capital to the U.S.

Having spent the 1950s at Harvard Business School, the 1960s at Ohio University, the 1970s at the Boston Company and the 1980s and onwards in the political arena, Alden said that each decade of his life opened up new challenges and opportunities. Alden is survived by his four children: Robert, Anne, James, David and his eight grandchildren.

“Dr. Alden, a revered figure in our University’s history, will be greatly missed. His leadership, vision, and love of learning will live on for generations at the University,” said Neil Romanosky, dean of University Libraries. “We at the Libraries are especially grateful for Dr. Alden’s strong belief in the Libraries as the academic and cultural heart of the institution, and for his advocacy that led to the construction of Alden Library. His name will forever be synonymous with Libraries at OHIO.”