Among the many cultural contributions from ancient Mesopotamia is the development and advancement of an early pictograph-writing system called cuneiform, whereby symbols were pressed into wet clay and then left to dry in the sun to create a clay object that was used as a vehicle of communication. 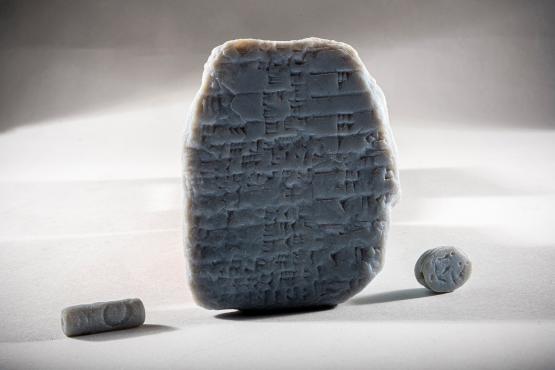 An example of a cuneiform clay tablet from the OHIO Libraries’ “Pages from the Past” set, along with a Babylonian cylinder seal and an Egyptian scarab, have recently been made into 3D prints and are now available as surrogate 3D objects for use in a variety of classes as well as in research.

According to the “Pages from the Past” accompanying text, the sets were created from 1925 to 1968 by Foliophiles, Inc., a now defunct New York association of rare book dealers (also known as the Society of Foliophiles). Each set was assembled into a thematic portfolio of historic materials for academic institutions “…as teaching tools in order to illustrate the evolution of manuscript and letterpress traditions.”

What is unique about the recent 3D scanned artifacts is that they are not just an assemblage of manuscript leaves, or pages from books, but are objects of great historic interest.

“These three artifacts are unusual because they are objects; they are not pages—and they are the oldest objects that we [the OHIO Libraries] have,” explains Dr. Miriam Intrator, special collections librarian and curator of the Rare Book Collection, which houses the set.

Since the 1960s, the Libraries’ “Pages from the Past” set, which also consists of early printed leaves, or pages from books, has had a long history of use for classroom visits to the Mahn Center, with more recent usage by students studying ancient languages and the history of knowledge and information.

“The 3D prints have already been used in the classroom with Cory Crawford, associate professor of Classics and World Religions, this past fall, as well as with another class studying the history of the book, and with a class from Federal Hocking High School whose students were studying ancient alphabets and scripts,” explains Intrator.

With the high classroom interest, and because of the objects’ age and fragility, especially the flaking of the clay tablet, there was a need to address issues of preservation and access.

“Miriam Intrator approached me asking if there were conservation treatments we could do for the tablet, [but because] I am not an object’s conservator, there wasn’t anything I would want to do to it directly,” explains Miriam Nelson, head of Preservation & Digital Initiatives and interim coordinating director of the Mahn Center collections.

In the course of researching a possible solution, Nelson reached out to Misako Hata, lab director at the Innovation Center, for advice on creating 3D surrogates of the objects.

“I asked her how difficult it would be, and what the process would be, to create the [3D] file that she would print from, and she [Hata] recommended that we get in touch with the WitmerLab, here at Ohio University,” says Nelson. “Dr. Witmer’s lab studies the morphology of vertebrates, and they do paleontology. So, they have been actively scanning fossils and working with the Innovation Center to create 3D prints.”

Ryan Ridgely, the research associate in the WitmerLab who is skilled at 3D modeling, scanned the Libraries’ artifacts with a MicroCT scanner to create the 3D scans that were read by the 3D printer.

The MicroCT scanner, located at The Ridges, functions by gathering data in a series of layers, and together, those layers of images create a kind of map of a 3D object, explains Nelson.

The entire process, from start to finish, went fairly quickly.

“Everything happened last summer. Misa created the first prints from the scans, and we are still playing with the different materials that you can use in 3D printing,” says Intrator. “We may also create some larger-than-life-size prints of the scarab and seal, which are quite small. These will be for the students to [better] see the markings.  So, we are still playing around with printing possibilities.”

Both Intrator and Nelson agree that besides the 3D surrogates, the most exciting part of the project was the collaborative aspect of working with other units on campus. Even though from most people’s perspectives paleontology and libraries are completely different, the team identified a shared value for preservation and access.

“The WitmerLab is an incredible place, doing incredible work. We are grateful for how fantastic, open and generous they were with their time and explanations—and for their interest in these objects and our project, which, on the face of it, have almost nothing to do with what they normally do,” says Intrator.