On Nov. 8, 2019, in celebration of the 50th anniversary of Alden Library, the Libraries invited alumni, and the OHIO and the Athens communities to late afternoon presentations surrounding  Manasseh Cutler. One presentation was by historian Dr. Ann Fidler, who examined the life and legacy of Cutler in “Finding Manasseh.”

Manasseh Cutler had filled the pews as a Congregational minister with his insightful sermons, served in the American Revolutionary War, was a scientist and physician, and played an important role in the development of the Old Northwest Territory with a land agreement from the Continental Congress that laid the groundwork for the establishment of Ohio University. 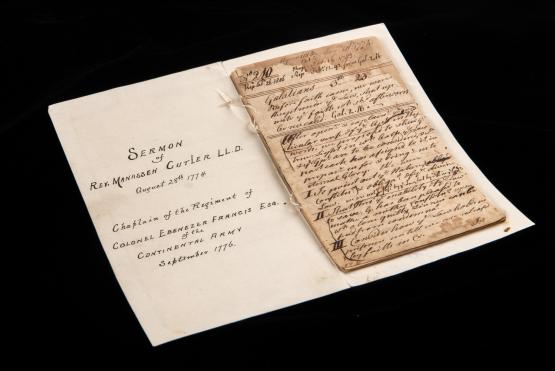 During Fidler’s presentation as the audience listened intently while she painted a verbal picture of OHIO’s founder, she paused to point to an image of a 1774 manuscript sermon by Rev. Manasseh Cutler.  She had been discussing other institutional papers, which had once belonged to Cutler, and noted that there were still some of his manuscripts in private hands.

“In fact,” she said with a smile, “this sermon has recently come on the market.  Wouldn’t it be nice if somebody bought this and gave it to Alden Library as a 50th birthday present?”

After all, Fidler said, “We are here to celebrate the birthday of Alden Library, and when you have a birthday, it is nice get a birthday present.”

Stacey Lavender, a special collections librarian who was in attendance, laughed along with the rest of the audience, unaware Fidler had planned to make this suggestion, but she enjoyed the gesture just the same.

“That same evening, Katharin and Ted Foster came up to me, and asked, ‘Would you really be interested in having the sermon?’ They indicated that they would like to buy it for us and give it to the Libraries,’” explained Lavender. “I just thought that was so generous and wonderful. I couldn’t believe it worked out that way.” 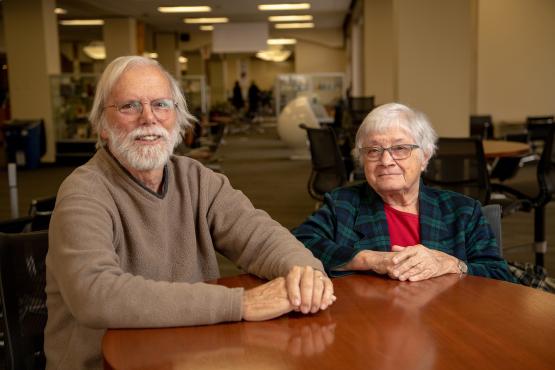 Although new to collecting historical materials for the University, Katharin Foster, a retired OHIO librarian who was head of the Libraries’ reference department, and now, an Episcopal priest retired, was touched by Fidler’s presentation.

“After she [Fidler] mentioned that this manuscript was for sale, Katharin nudged me and said, ‘Let’s get it,’” explained alumnus Ted Foster, who retired in 2003 as head of the Libraries’ microform, map and non-print department.

“We hit upon this as something that we could donate that could be a lasting contribution to the actual Libraries—other than money,” said Katharin Foster.

Fidler, who has been associated with OHIO for a number of years as a faculty member in the history department, dean of Honors Tutorial College, and then various roles in the provost’s office before finally becoming a scholar in residence at the Mahn Center, is working on a biographical account of Cutler.

“A manuscript sermon is so valuable to me, or to anyone, who wants to learn more about Manasseh Cutler. He was a Congregational minister for 52 years, and during the course of that career, he wrote many sermons,” explained Fidler. “Each one of them provides important information about his life.”

To some, a sermon copy may seem inconsequential, even one that has survived as long as this one has, but for others like the Fosters, the sermon gives a sense of our nation’s history.

“It gives you a real sense of time and place. The date was before the Revolutionary War… and that impresses the heck out of me,” said Katharin Foster. “And of course, the fact that Cutler kept all these things.”

The sermon, which Fidler now refers to as the “Foster sermon,” also offers a unique insight into the political quandary held by the citizens of the thirteen colonies and the push against the rule of the Crown.

“The Foster sermon is one of particular historical interest as it was written during the turbulent summer of 1774.  Manasseh’s diary entries, for that time, describe ‘the melancholy situation of our public affairs, as the passage by the British Parliament of the ‘Intolerable Acts’ riled the colonies,” said Fidler.

The Intolerable Acts, as some may recall, were retaliatory laws passed after the Boston Tea Party, a protest by colonists against the British attempt to control their trade.

“In the Foster sermon, Manasseh discusses the nature of divine law and its obligations.  One of the themes of the sermon, that ‘law holds us uniform until we are released by faith,’ provides me with insights into how he was grappling with the dilemma of civil disobedience to the Crown,” explained Fidler.

She continued by saying, “As he went on to participate in the American Revolution as a chaplain, I need to know as much as possible about why Manasseh joined the cause, and the Foster sermon will help me flesh this out.”

The Fosters, like most of the OHIO community, knew who Manasseh Cutler was because of Cutler Hall located on the College Green, as well as seeing his portrait hanging in prominent buildings on the Athens Campus, but had never before attached his name to his many accomplishments.

“Dr. Fidler at the very end of the talk, said to all of us, ‘You are a result of what he did.’ I never thought of it like that, which gave a sense of ownership with him and this place that I hadn’t had before,” said Katharin Foster.

One of the OHIO Libraries’ special collections is the Manasseh Cutler Papers housed in the Mahn Center, which includes many of Cutler’s lifelong interests.

“The collection that we have is materials relating to his work as a minister and his interest in the sciences. He was particularly interested in botany, so we have a collection of botanical notebooks. One notebook …[is] really colorful and fun to see,” explained Lavender. “We also have quite a few of his handwritten sermons.”

According to Lavender, the 1774 Foster sermon, which may be one of the earliest Cutler sermons owned by the Libraries, will be a supplement to the Libraries’ Manasseh Cutler Papers. The finding aid will note that the donation was made by the Fosters in 2020.

“We are very grateful to the Fosters for this generous gift,” said Neil Romanosky, dean of University Libraries. “To have a work from Cutler of such historical value presented to the University Libraries is just a spectacular way to close out our yearlong celebration of the 50th anniversary of Alden Library.”