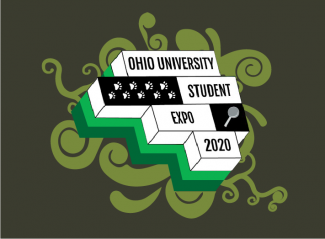 The Ohio University Student Research and Creative Activity Expo took place online this year due to the coronavirus, with students presenting their research projects virtually on Instagram and Twitter using #OUVirtualExpo. University Libraries was able to modify their annual student awards to fit the online format and gave awards to four outstanding student researchers.

Every year, the Student Expo showcases some of the best undergraduate and graduate work that Ohio University students have to offer, and students can compete for cash and other prizes. This spring, due to the coronavirus pandemic, the Student Expo moved onto Twitter and Instagram in order to continue the tradition and provide credit to the students who have dedicated many hours to their work.

Supported by the Libraries’ Vernon R. and Marion Alden Endowment, the Libraries is able to award four prizes each year to students who utilize the Libraries’ resources for their research or creative project. This year, the Libraries’ committee chose four very impressive projects, which were shared on Twitter and Instagram, and cover a variety of subjects.

Students were asked to complete an application for the award that described how they utilized the Libraries resources in their research, and to tag their posts with #OUVirtualExpoLibraryAward.

The first-place graduate student winner was Tetiana Tytko, whose project, “Suicide Markers in Online Communication: A Case Study of Grad Student’s Writing” was inspired by the Send Silence Packing exhibit held in August 2019 that displayed backpacks in the memory of college students who committed suicide. She hopes to help predict and prevent suicide by studying the language and text messages of students. Tytko is a second-year master’s student studying linguistics in the College of Arts and Sciences.

“We were really impressed with the work that [Tetiana] put into it,” said Janet Carleton, Digital Initiatives coordinator. “And we were impressed with how well she wrote on something that was pretty important. She also wrote a strong paragraph about how she [utilized] the Libraries and how much it helped her.”

The second-place graduate student winner was Adonis Durado, a third-year master’s student studying media arts in the Scripps College of Communication. His project, “Visualizing the Philippine Tropical Storms from 1884 to 2019” looked at storm patterns in the Philippines, which he said were the “most storm-exposed country on the planet.” Durado used many diagrams and very detailed maps to make his science-heavy research topic accessible to a general audience on Twitter.

The first-place undergraduate student winner was Cara Schildmeyer, whose project was called “Postural Stability, Running Biomechanics and Running Related Injuries (RRI) in a Population of Collegiate Cross-Country Athletes.” Schildmeyer, a senior in the Honors Tutorial College majoring in biological sciences, wanted to answer the question, “Are balance deficits a risk factor for RRIs?” in order to try to reduce injuries that occur due to long distance running.

“What stood out to me with her project was the breadth of the Libraries’ resources that she used,” Jen Harvey, Library events coordinator, said. “That was one of the reasons she was at the top of the committee’s list.”

The second-place undergraduate student winner was Alexandra Wainwright, who was also a senior in the Honors Tutorial College, majoring in sociology and anthropology. Her project, “The Social Construction of Civil Asset Forfeiture as a Social Problem in the United States,” looked at legislation and cultural commentary surrounding civil asset forfeiture (the process where law enforcement officers take assets from persons suspected of a crime without charging the owners) throughout US history.

Congratulations to this year’s winners and to all of the students who participated in this year’s Student Expo – the Libraries applauds your hard work and dedication to your research and creative activities!