Fifty years ago, OHIO students, torn apart by the emotional polarization of the Vietnam War, banded together in solidarity over the U.S. invasion of Cambodia. College campuses across the nation rallied against the military action with anti-war demonstrations and hot-blooded political discussions—before everything went seriously wrong. During a protest, four students were shot and killed by the Ohio National Guard at Kent State University.

A devastating wave of emotion rippled through the Athens Campus as OHIO students gathered by the hundreds listening to speakers and trying to make sense of a senseless situation.

“The peaceful mass rally, one of the largest ever held on the College Green, was marked by repeated calls for ‘non-violence,’ ‘unity’ and requests to ‘keep it cool,’’’ wrote David Blumberg in the student newspaper, The Post.

The University president and administration, in support of the students right to assemble, appealed to all for reasonable discussions through classroom-led teach-ins on the Green with the aim of calming the emotionally-charged assembly.

“The administration let us bring our classes outside on the lawn. We did not have to teach our subject; we just had to calm students down and have a discussion of what was going on. Many teachers took advantage of that, including myself,” explained alumnus Peter Goss, an OHIO doctoral teaching fellow at the time and now a retired professor of architectural history and photography instructor from the University of Utah.

“The crowd ebbed and flowed throughout the day. It may have ranged from a few hundred to maybe a thousand at any one time,” wrote Ken Steinhoff, alumnus and former photographer  of The Post.

“The group wasn’t made up of your ‘usual suspects’ of campus radicals and protesters,” said Steinhoff. “Faculty members and Greeks were sitting side by side with long-haired hippies,” he explained.

Along with the University sponsored teach-ins, a platform was constructed in front of the portico of Memorial Auditorium with a microphone and speakers mounted in trees, so anyone could address the crowd about anything they wanted to say.

“So, this guy walked up to the microphone and started shouting revolutionary [slogans like] ‘Power to the people;’ and ‘It’s time for the revolution,’” said alumnus Doug McCabe, a freshman at the time and now retired as the curator of manuscripts for OHIO Libraries.

Agitated by this type of talk, a freshman who had just come from Kent State emerged from the dark, grabbed the microphone and said, “This is not the way to go. There are more peaceful ways to change what has been happening, and to change society for the better.” This young woman was alumna Valeria McCabe, who is now retired as OHIO’s director of student teaching and spouse to Doug McCabe.

According to McCabe, there were people here like the Students for a Democratic Society [SDS], a political organization that flourished in the mid-to-late 1960s for activism against the Vietnam War, “…and others who were really agitating for a lot more serious and violent reactions” during the days prior to the closing of the University. 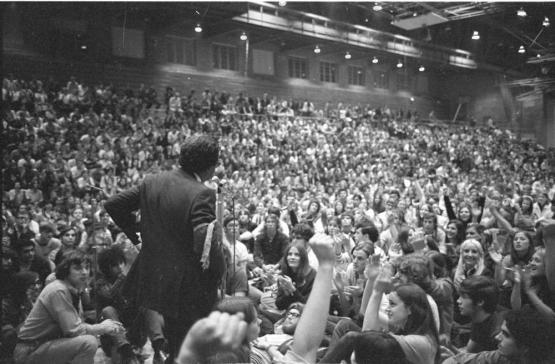 In addition to student gatherings, other well-known political activists came to speak on OHIO’s campus, like Gordon Parks, a documentary photojournalist and guest speaker during Communication Week held by the College of Communication.

“After the May 4 event happened at Kent State, the next day Gordon Parks, who was an African American photographer at LIFE magazine, came to campus. I guess someone talked to him about speaking to the students to try and calm them down; I am not sure,” said Goss. “I photographed that [rally in Grover Center taking] place with [over] 3,000 students on the [Athens] campus” 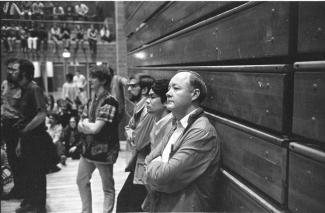 Also present at many gatherings was OHIO’s President Claude Sowle, who in this instance, stood in the back of the room watching and observing for any signs of positive outcomes.

“He worked hard to avoid problems and continued to do so throughout [that tumultuous period],” said Goss, who photographed this image of the president leaning against the bleachers.

By this time, the governor of the state of Ohio had decided to send the National Guard to the OHIO campus, and after that, “It got really bad,” said Goss.

“At some point during the week, the Chubb Library was occupied by the students. Some of the reporters and photographers [from The Post] decided that we would stay in the library during the brief siege,” wrote Steinhoff.  “We figured the students would be less likely to trash the place if we were there to record it. We also assumed the police wouldn’t storm the building if we were there to photograph any head cracking. We were keeping both sides honest.”

Chaos began to reign, and everything began to turn topsy-turvy.

“I think a lot of people were unsure just what to do. There was a lot of push from [President] Claude Sowle and others to: ‘Stay calm;’ ‘Keep classes going;’ and ‘Peacefully protest if people felt that way, but to respect other people who wanted to continue going to classes,’” said McCabe.

Finally, during the early morning hours of May 15, 1970, President Claude Sowle, concerned about the safety of students and the Ohio University community, announced that the University was closed.

It is ironic that during this the anniversary of the Kent State University shootings and all its tangled mess of lessons learned, Ohio University has been forced once again to close its physical buildings over concerns of safety. And, as in the past, OHIO students, faculty and staff stand together in solidarity once again—but this time against another kind of war—the fight against the coronavirus global pandemic.

Related story: “OHIO’s Class of 1970 looks back on a school year unlike any other.”