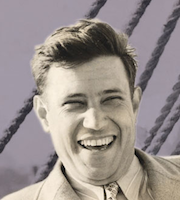 Jesse Stuart’s life began in a one-room log cabin in Greenup County, Kentucky. His youth was spent working on his family’s farm and struggling through high school. After graduating from Lincoln Memorial University in 1929, he went on to do graduate work at Vanderbilt University, where he studied with Donald Davidson and Robert Penn Warren.

In 1934 his Man with a Bull-Tongue Plow was published; it was his first publication to gain national attention, earning him the Jeanette Sewal Davis Prize for that year. Other collections of short stories appeared in the next several years, followed by the 1940 publication of his first novel, Trees of Heaven, in 1940. He was a very prolific writer; according to the American National Biography Online, he wrote in excess of 2,000 poems, 450 short stories, and 50 or so books in various genres. He was named Poet Laureate of Kentucky in 1954.

After suffering a stroke in 1978, “Stuart realized that he had created a legacy that needed to be perpetuated, so he and business and educational leaders across Kentucky created the Jesse Stuart Foundation in 1979…which is devoted to preserving the legacy of Jesse Stuart and the Appalachian way of life.”

Our Rare Book Collection has around 70 volumes by Jesse Stuart. We invite you to visit Archives and Special Collections to consult works by Bukowski, or other parts of our collection. See our Hours on the left sidebar of the Archives and Special Collections home page. In addition, the Libraries have nearly 50 volumes of works about Stuart: biographies, critical interpretations, and the like.