The Strowger Award for Innovation in Communication

Innovation in information and telecommunication industries has transformed the economy and society. The J. Warren McClure School presents the Strowger Award to distinguished innovators in the field to recognize their contribution to technological progress. The McClure School works with local artists to produce each Strowger Award pictured below: 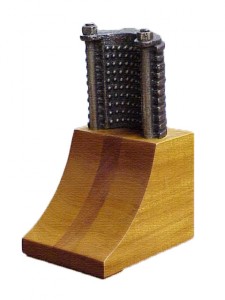 The 2018 Recipient of the Strowger Award:

Past recipients of the Strowger Award:

In 1891 Almon Strowger was issued a patent for the first electromechanical telephone switch. Prior to Strowger’s invention, telephone switching was completed using human operators. As legend has it, Strowger, an undertaker by trade, believed that one of the telephone operators in his town was diverting business to a rival in his trade. As the saying goes, necessity is the mother of invention.