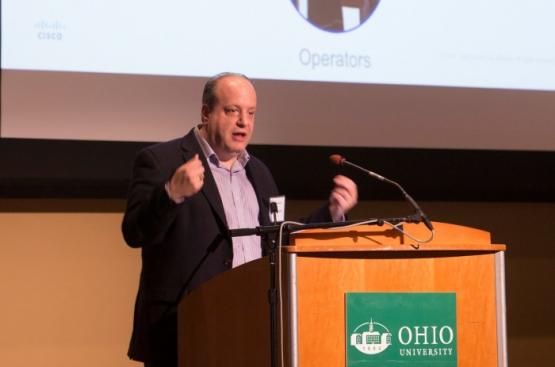 “We are on the cusp of the next big transition in telecommunications, from software to Cloud technologies, and I assure you it is going to be big.”

OHIO welcomed the inventor of session initiation protocol (SIP), Jonathan Rosenberg, Ph. D. on Thursday, March 26, during ITS Day 2015. Dr. Rosenberg received the Strowger Award for Innovation in Telecommunications, and shared his vision for the future of voice communications.

Rosenberg currently serves as Vice President and Chief Technology Officer (CTO) for Collaboration at Cisco. There, he manages the overall architecture and technology strategy of all Collaboration products. Before joining the Cisco team, Rosenberg was Chief Technology Strategist for Skype and focused his work on the integration of Skype into Facebook. Rosenberg has been a long time player in the IP communications industry, and is most well known as the primary author of the Session Initiation Protocol (SIP), RFC 3261, inventor of SIMPLE (SIP for presence and IM) and ICE (Interactive Connectivity Establishment.)

SIP is the foundation of all modern communication. Rosenberg developed SIP, which enables voice calls on the Internet and services like Skype. Dr. Rosenberg will discuss the future of voice in the rapidly evolving Internet ecosystem. Over the last 20 years, Voice over IP has moved from a research technology to mainstream, widespread adoption. Now, we are on the cusp of the next major transformation towards cloud. In this talk, Rosenberg will discuss this new technology transition and consider its impacts on IP communications. Will there be a SIP 3.0 that powers the cloud? What is the role of standards in cloud communications? In retrospective, did SIP meet the goals it was set out to achieve? How are things different now than they were when SIP was created?

Rosenberg is the fifth most prolific author of Internet standards of all time, and was named on of the 100 most innovative technologists in the world under the age of 35 by Technology Review Magazine in 2002.

“SIP, an incredible success, has been at the forefront of driving the first transition in telecommunications from hardware and circuits to software.”

“SIP drove the transition in telecommunications from hardware to software, based on IP technologies.”

“My friends, we are on the cusp of the next big transition, and I assure you it is going to be big. And that is the transition from software to Cloud technologies. And trust me when I say these are very different.”

“If you look in the Cloud Ecosystem…this is a change that is not by a factor of two or three, but a multiple order of magnitude change in the velocity of delivery of software in the hands of end-users.”

“Whenever there is a technology shift that makes something not just 20% better, not 100% better, but a thousand or million times better, that means disruption is coming.”

“Will there be a SIP 3.0? No, there won’t. Because technology has shifted such that there is no longer a need for something like that. A rigorously standardized protocol that defines how every communications feature should work. Cloud means we don’t need that anymore.”

“My career is dedicated to seeing innovation and disruption in telecommunications. That’s what I have dedicated my career to. And at all times, it’s all about what’s the right tools and technologies for that job. In the prior cycle, it’s was exactly the stuff I was working on before. But as you heard, the world is different now. In this new world order, the thing that’s going to deliver innovation and disruption and great capabilities for people to communicate in telecommunications, is this new model. And so I’m not at all afraid of it; quite the contrary, I’ve embraced it wholeheartedly. And believe to the core of my being, in case you haven’t been able to figure that out, that this is the future of communications. Because it can bring to the table the kind of incredible innovation that the Internet is capable of delivering.”

If you missed Jonathan Rosenberg’s ITS Day 2015 presentation, or it so good that you want to watch it again, this link will take you to the full video: http://bit.ly/1Cpba48.