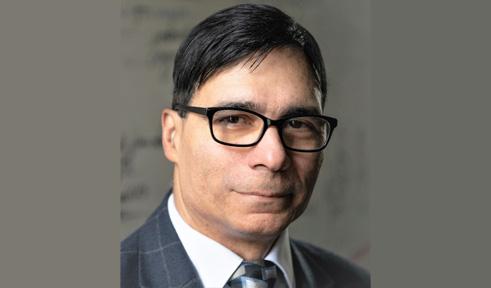 M.A., University of California at Irvine

Although Dr. Vigo is interested in many areas of cognitive research, his core work focuses on the formulation and development of mathematical and computational models of similarity assessment, attention, perception, concept learning, categorization, and choice behavior. For example, he has investigated the degree of difficulty that humans experience when learning different types of concepts. In addition, he has investigated the influence of structural context on the aforementioned capacities. Three key questions drive this research. First, why are some types of concepts more difficult to learn than others? Secondly, can the subjective degree of learning difficulty of different types of concepts be reliably predicted? Thirdly, can context effects in similarity assessment, perception, and choice behavior be accurately accounted for by structure detection? In Dr. Vigo’s work, he argues that the key to answering these questions lies on the ability of organisms to detect invariance structure patterns in categorical stimuli.

Toward this end, Dr. Vigo created several mathematical frameworks and formal models for characterizing the way that observers learn concepts and assess similarities from categorical stimuli. Historical and new empirical evidence suggests that these structural models, algebraic, analytic, and non-probabilistic in nature (and hence, much like the models encountered in classical physics), are more robust and cognitively plausible predictors of the degree of concept learning difficulty experienced by humans than the well-known alternatives. Notably, all of this is often accomplished without the need for free parameters. This research has been articulated in several papers (Vigo, 2006, 2008, 2009, 2011, 2012, 2013) and in a book entitled "Mathematical Principles of Human Conceptual Behavior: The Structural Nature of Conceptual Representation and Processing" (Vigo, 2014).

The SCOPE LAB (Structure, Concepts, and Perception Laboratory) at Ohio University seeks to extend the above research empirically and theoretically. For example, in the SCOPE Lab empirical and theoretical research on human concept learning and categorization behavior using eye tracking technology are conducted. More specifically, eye tracking techniques are used to explore correlations between saccades and the concept learning behavior predicted by a variety of models, including models from Dr. Vigo’s generalized invariance structure theory (GIST; Vigo, 2013, 2014, 2015) and his representational information theory (RIT; 2011, 2012, 2014).

Other research activities in the SCOPE Lab supervised by Dr. Vigo include empirical and theoretical research on decision making behavior as a function of similarity assessment, dissimilarity assessment, and categorization. Also, Dr. Vigo is interested in advancing psychophysical approaches to cognition and researching how humans judge similarity and dissimilarity between structural or configural stimuli such as human faces. In related work, he introduced a mathematical model of similarity that predicts the empirical similarity ordering of a key class of configural stimuli associated with deductive inference (Vigo, 2009a, and 2009b). Finally, Dr. Vigo is also interested in problem solving behavior in mathematical domains (e.g., geometry, algebra, and physics), the perceptual nature of aesthetic judgments, and music cognition.

Vigo, R., Basawaraj, B., (2016). Structural Manifold Analysis: A New Method for Dimensionality Reduction Based on a Computational Theory of Human Concept Learning. IEEE Proceedings of the 2016 International Joint Conference on Neural Networks.

Vigo, R., Basawaraj (2013). Will the most informative object stand? Determining the impact of structural context on informativeness judgments. Journal of Cognitive Psychology, 1-19.