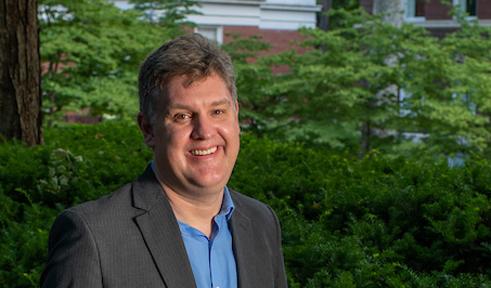 Associate Professor & Department Chair of History, and the James Richard Hamilton/Baker and Hostetler Professor of the Charles J. Ping Institute for Teaching of the Humanities
Bentley Annex 433
History
schoen@ohio.edu
740-593-4351

Brian Schoen (pronounced SHANE) is Associate Professor and Chair of the Department of History and the James Richard Hamilton/Baker and Hostetler Professor of Humanities.

His research and teaching focus on the political, social, economic, and intellectual history of the early United States from its early struggles through its near dissolution in the midst of the Civil War. His research examines how international developments shaped regional perception, politics, commitment or opposition to slavery, and relationships to and within the federal union.

Before coming to Ohio University in 2006, he was a post-doctoral fellow at the Library Company of Philadelphia and taught at Georgetown University and California State University, Sacramento. During the 2014-15 academic year, he was the Fulbright-sponsored Mary Ball Washington Professor of American History, at the University College, Dublin. While there, he delivered two public lectures: “American Interregnum: Secession, the US Civil War & the 19th Century’s Crisis of Governance,” and the Lincoln Lecture, “Abraham Lincoln: The Life and Death of a Statesmen,” available as a podcast through the HistoryHub.

He has presented to a variety of forums domestically and abroad and is currently completing a co-edited collection on Ohio's early settlement and one situating the Civil War into a continental perspective, in addition to a new book-length study of the statecraft of the sectional and secession crisis of 1860-1861. His work has been funded by the National Endowment for the Humanities, the Fulbright Commission, the Filson Institute, and an Ohio University Baker Fund Grant.

Between Sovereignty and Anarchy: The Politics of Violence in the American Revolutionary Era (The University of Virginia Press, 2015), co-edited with Patrick Griffin, Robert G. Ingram, Peter S. Onuf.

“The Statecraft of Secession and War: How Foreign Powers Unintentionally Shaped the Start of War,” in The American Civil War in a Global Context, edited by Peter Stearns (Richmond, VA: Sesquicentennial Commission, 2015): 16-26.

“The Fate of Republics and Empires Hang in the Balance: The United States and Europe during the Civil War Era.” Organization of American Historians, Magazine of History 27:2 (April, 2013): 41-47.