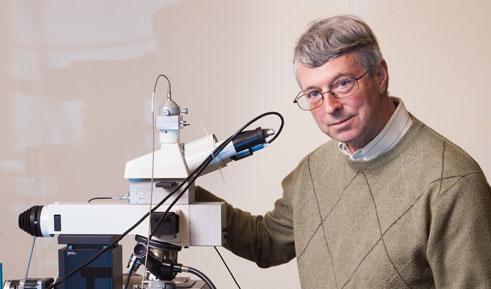 Nanoscale heat generation and dissipation impacts many fields of current research, including applications in medical therapies and the semiconductor industry, where device dimensions continue to be reduced as number densities increase. As device sizes approach the nanoscale, they become close in scale to the phonon mean-free path, where certain pathways for heat dissipation are less efficient. The classical heat diffusion law breaks down and the heat flow becomes ballistic. Also in this regime, interfacial properties begin to dominate and limit the heat transfer away from the nanostructure. Characterizing these interfacial properties and their impact upon heat dissipation is essential for an understanding of nanoscale heat transport.

An absorption measurement of nanostructures has the potential to be a more sensitive measurement over scattering because absorption scales as the volume instead of as volume squared. This inherent sensitivity has motivated the development of a number of novel techniques that have been used to study isotropic and anisotropic nanostructures in varied environments. Most of these techniques overcome the difficulty inherent to absorption measurements, where a small change in the transmitted light needs to be detected, by using modulated light. It is also possible to deduce the amount of light absorption by looking at an effect in the surrounding matrix. Understanding the thermal transport from a flux of heat that crosses the nanostructure interface is key to relating the amount of light absorbed by the nanostructure to a temperature change in the surrounding medium.

We use the photothermal properties of single isolated metal nanoparticles for unique and in-depth studies of nanoscale heat transfer. We have shown that a single isolated metal nanoparticle can generate sufficient heat upon irradiation to induce readily observable phase changes in ice. This phenomenon can serve as the basis for a sensitive nanocalorimetry experiment in which the temperature profile around a nanoparticle heat source can be measured as a function of optical energy input. Recently we have used a thin film of Al0.94Ga0.06N embedded with Er3+ ions as an optical temperature sensor to image the temperature profile around optically-excited gold nanostructures of 40 nm gold nanoparticles and lithographically-prepared gold nanodots. The sensor is calibrated to give the local temperature of a hot nanostructure by comparing the measured temperature change of a spherical 40 nm gold NP to the theoretical temperature change calculated from the absorption cross section. The calibration allows us to measure the temperature where a lithographically prepared gold nanodot melts, in agreement with the bulk melting point of gold, and the size of the nanodot, in agreement with SEM and AFM results. Also, we measure an enhancement in the Er3+ photoluminescence due to an interaction of the NP and Er3+. We use this enhancement to determine the laser intensity that melts the NP and find that there is a positive discontinuous temperature of 833 K. We use this discontinuous temperature to obtain an interface conductance of ~10 MW/m2-K for the gold NP on our thermal sensor surface.