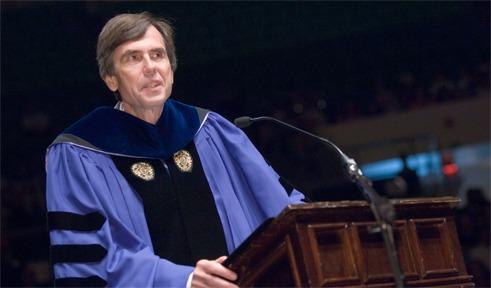 Chester Pach is Associate Professor in the Department of History. He specializes in the history of U.S. foreign relations and recent U.S. history. His research has focused on U.S. involvement in the Cold War and the Vietnam War as well as the Eisenhower, Johnson, and Reagan presidencies. He has a particular interest in television coverage of international issues and the intersections between politics, popular culture, and international history.

Professor Pach has served on several committees of the Society for Historians of American Foreign Relations. He is currently a member of the Editorial Board of H-DIPLO, a part of the H-NET Electronic Discussion Network.

In 1995, he was a Fulbright Professor at the University of Otago in Dunedin, New Zealand. He is the winner of the Outstanding Graduate Faculty Award for 2005-06 and gave the address at the Graduate Commencement on June 9, 2006.

He gave a presentation entitled "'Our Worst Enemy Seems to Be the Press': TV News, the Nixon Administration, and U.S. Withdrawal from Vietnam, 1969-73," at a conference on "The Politics of Troop Withdrawal" in June 2008 at the Miller Center of the University of Virginia. See Professor Pach give his presentation.

He delivered the keynote address at the 20th anniversary of the Ohio University-Leipzig University international partnership in June 2012. During a recent trip to Leipzig, he gave a presentation about Ronald Reagan and the Berlin Wall.

He is completing The Presidency of Ronald Reagan in the American Presidency Series for the University Press of Kansas. He is also writing a book entitled The First Television War: TV News, the White House, and Vietnam. He has received grants from the National Endowment for the Humanities, the Lyndon B. Johnson Foundation, and the Baker Fund of Ohio University to support his research and writing.

“‘We Need to Get a Better Story to the American People’: LBJ, the Progress Campaign, and the Vietnam War on Television” in Selling War in a Media Age: The Presidency and Public Opinion in the American Century (University Press of Florida, 2010).

"Thinking Globally and Acting Locally" in The Eisenhower Administration, the Third World, and the Globalization of the Cold War (Rowman and Littlefield, 2006.)

"Sticking to His Guns: Reagan and National Security," in The Reagan Presidency: Pragmatic Conservatism and Its Legacies (University Press of Kansas, 2003)

"The War on Television: TV News, the Johnson Administration, and Vietnam," in A Companion to the Vietnam War (Blackwell Publishers, 2002)