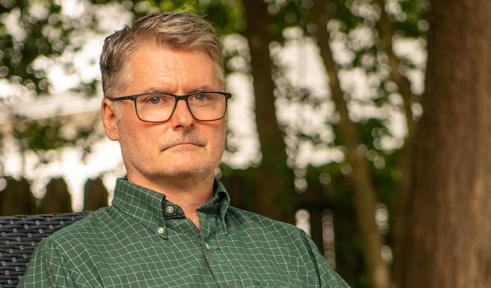 Kevin Mattson is Connor Study Professor of Contemporary History in the Department of History. His research focuses on the intersection of ideas and politics in the 20th century. He is on the editorial board of Dissent magazine, and he serves as the Chair of Committee "A" for the statewide chapter of the American Association of University Professors (AAUP). Learn more by visiting his personal website or his blog.

He is the author and co-editor of many books, most recently WE’RE NOT HERE TO ENTERTAIN: Punk Rock, Ronald Reagan and the Real Culture War of 1980s America, where he documents how the punk rock movement produced ideas and modes of expression that defied the basic assumptions of the time, and reminds readers of punk’s lasting cultural and political importance.

Other books include Just Plain Dick: Richard Nixon’s Checkers Speech and the “Rocking, Socking” Election of 1952. The New York Times called his prior book, What the Heck Are You Up To, Mr. President?: Jimmy Carter, America’s Malaise, and the Speech that Should Have Changed the Country "exactly what political history should be—incisive, fast-paced, and fun to read." See a complete listing of his books.

His writing has appeared in American Prospect, the Nation, the New York Times Book Review, Salon, and the Guardian. And he has made numerous media appearances, including on NPR, Fox News, C-SPAN, and the Colbert Report.