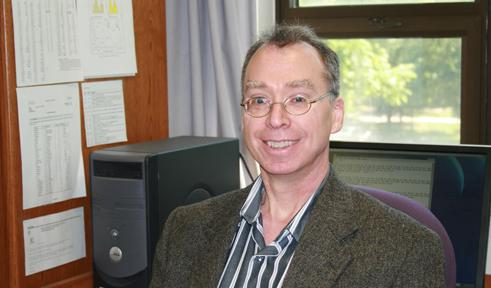 Dr. Hicks is on attachment to the Department of Energy.

Structure of the Universe: From Quarks to Superclusters

Kenneth Hicks does research in the area of experimental nuclear physics. Before coming to Ohio University (OU), Ken Hicks was a Research Scientist at Canada's largest proton accelerator, in beautiful Vancouver. While visiting his family in Ohio, he interviewed at OU and decided he liked everything about it: the campus, the people and the opportunity to teach students. While it was a difficult decision to leave Vancouver, now he is happily living in Athens and teaching at OU.

His primary research interest is the interaction of quarks and how they combine to make strongly-interacting particles (like the proton). To investigate the structure of these particles, he uses accelerated beams of electrons (or photons) which hit targets of protons or neutrons. From the scattering angles and intensities of particles produced from these collisions, the force between quarks can be studied. Of special interest are searches for "exotic" particles that do not fit into the standard model of constituent quarks. One example of an exotic particle is the "pentaquark," which has its lowest valence structure made from four quarks and one anti-quark. Hicks has written several review articles on searches for pentaquarks, which have so far eluded experimental confirmation, but would extend our understanding of quarks if they could be found. He carries out his research at the Thomas Jefferson National Accelerator Facility in Virginia and the Super Photon ring at 8 GeV (SPring-8) in Japan.

On teaching: "I enjoy finding new ways to motivate my students, whether it is for freshmen or seniors. The key is understanding that each student is different, and that "one size doesn't fit all.'' Getting to know each student individually in every class is important to me. When students know that you care about them, it makes a difference.'' Favorite quote: "It is impossible to travel faster than light, and certainly not desirable, as one's hat keeps blowing off.'' – Woody Allen

In 2004, Hicks was elected a Fellow of the American Physical Society (Division of Nuclear Physics) "for his recent leadership role in experiments which have opened the new field of exotic pentaquark baryon study and for his sustained contributions to nuclear physics.'' Since September 2006, Hicks has been writing bi-weekly columns about science for The Columbus Dispatch.

When not working, Hicks enjoys exercising, recreational mathematics, playing the piano, and doing sudoku puzzles. He and his wife also enjoy traveling, going to plays, and to the symphony.