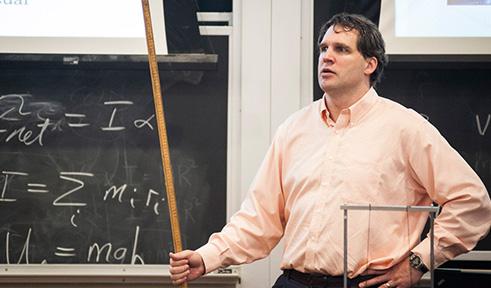 Justin Frantz seeks to live life according to the mantra "work hard and play hard," and approach life with faith and humor. Frantz is originally from Chalk Hill in Western Pennsylvania, where he grew up on a small lake with much fun and many great lifelong friends. He was educated at St. John the Evangelist, Uniontown, PA, then at Geibel Catholic High School in Connellsville, PA, where he had many inspiring teachers. He then attended Harvard University, where he graduated cum laude in major with a degree in physics in 1996. He was a standout football (American) player and was the Harvard Crimson's 122nd team captain his senior year earning All-Ivy honors. After a two year adventure in computer software development and consulting (and skiing!) in Denver, he spent the next 10 years living in New York City, first obtaining his Ph.D. from Columbia University, and then commuting to his post-doc at the State University of New York (SUNY) at Stony Brook on Long Island. He came to Athens and joined the Ohio University Physics and Astronomy faculty in 2008.

After dabbling in some solar physics at NASA/Goddard while in college and some neutrino physics at first, Frantz became a Relativistic Heavy Ion physicist while at Columbia, a field which is at the intersection of nuclear and elementary particle physics. The goal of his research, primarily conducted at the Relativistic Heavy Ion Collider (RHIC) at Brookhaven National Lab (BNL), is to study and discover exotic states and interactions of matter which are governed primarily by the theory of the Strong force (called Quantum Chromodynamics or QCD) that, among other things, holds not only protons together within the atomic nucleus but also smaller particles called quarks and gluons together within the protons themselves. He is an expert on the production of very high energy versions of light waves called direct photons and how to use them to view something called the quark-gluon plasma (QGP) discovered at RHIC.

Besides his scientific interests, Frantz is still an avid football fan both of the his former teams, and also of the Pittsburgh Steelers. He has many hobbies including going to church, skiing, basketball, visiting family and friends, writing, and even playing the piano when he gets the occasional chance. More importantly, his wife Jen provides him with much support and love which he always enjoys. Finally, most significantly the gift of a beautiful daughter named Ava Tomasine was recently bestowed upon Jen and Justin and they are enjoying every crazy moment with her.