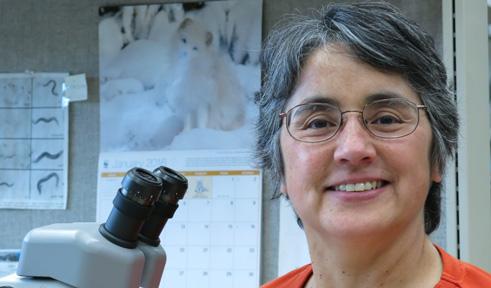 The research in our laboratory uses a model organism, the small soil nematode Caenorhabditis elegans, to examine the development and function of the nervous system. C. elegans is a wonderful animal for studying the nervous system, since many of the genes and processes necessary for nervous system development and function are conserved in humans. However, C. elegans has only 302 neurons controlling its simple behaviors, rather than the hundreds of billions of neurons needed to generate complex behaviors in humans. We use genetics (including transgenic animals), molecular biology, cell biology, microscopy, and behavioral assays to examine the development, distribution, and function of genes that are necessary for neuronal signaling using monoamine neurotransmitters.

In humans, monoamines are important for modulating behaviors such as arousal and reward; proteins that alter the uptake and release of monoamines are targets of several psychoactive drugs. Monoamines are also important for the modulation of specific simple behaviors in C. elegans. We are studying the development and function of several genes that are required for the normal function of monoaminergic neurons, including synthetic enzymes, vesicular and plasma membrane transporters, and putative monoamine degradation enzymes. We are interested in understanding how acute and chronic changes in these proteins alter monoamine-dependent behaviors and sensitivity to monoamines. What short-term or developmental changes occur when monoamine synthesis, release, re-uptake, and/or degradation are perturbed? We expect that understanding changes in this simple animal will increase our understanding of the much more complex changes that occur when monoamines are altered in humans.

I have always been interested in understanding how the nervous system controls behavior. My first laboratory experiences, while earning my B.S. in Biology at Stanford University, were using ground squirrels to understand thermoregulation. I earned my Ph.D. in Biology, with a concentration in Neuroscience, at Princeton University in 1987, studying the genetic bases of learning and memory in Drosophila. During a post-doc at the University of California, Berkeley, I used cellular imaging techniques to study early neuronal development in the grasshopper. I then began work on my current project, using the nematode C. elegans to study how the nervous system directs behavior. We study many levels of organization, from individual genes through cells and circuits and behavioral outputs, both during development and in the adult. This research was started as a post-doc, then continued during my work as a Research Scientist at the Oklahoma Medical Research Foundation. I moved to Ohio University in 2002, to combine my research activities with teaching and mentoring.