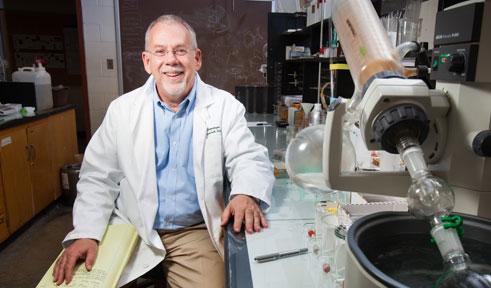 The synthesis of small and not-so-small organic molecules forms the foundation for our studies in organic chemistry at the interface of chemistry and biology. We view the somewhat disparate research areas of synthetic methodology development and drug discovery as a two-way street. The development of new synthetic methods and new avenues for parallel synthesis provides the inspiration for new directions in drug discovery and development. In a similar fashion, the identification of novel targets for drug discovery can also provide the impetus for the development of new methodology. Our group currently has three ongoing research projects.

All cancers rely heavily on glucose as the primary energy source and show increased glucose uptake and glucose metabolism when compared with normal cells. The increased glucose metabolism rates have been associated with hypoxia as well as metastasis and the invasive potential of cancer. Compounds that selectively inhibit basal glucose uptake should be able to inhibit cancer cell growth, induce cancer cell apoptosis, and provide a novel anti-cancer therapeutic strategy. We have designed and prepared novel small molecules that block basal glucose uptake and consequently kill cancer cells. This is a novel mechanism of action for an anticancer drug and the compounds that we have designed are among the most potent glucose uptake inhibitors reported. Our current work in this area is aimed at improving the stability and activity of our lead compounds. Additional ongoing work is focused on determining the SAR of our current lead compounds and understanding the mechanism of action. This work is carried out in collaboration with Prof. X. Chen (Ohio University).

This project involves the design and synthesis of new molecules that act as antibacterial agents through their specific interactions with the T Box antitermination transcription regulatory element. This work is carried out in collaboration with Prof. J. V. Hines (Ohio University). The initial lead compounds were discovered as part of our earlier research on the development of new chemical reactions. This research project provides an excellent example of how research in synthetic methodology can lead to new drug discovery projects. The oxazolidinones that we prepared were the first molecules to show the ability to modulate the T box antiterminator RNA. Our subsequent work identified additional structural modalities that retain this activity. This work has lead to the identification of the first small molecule modulators of RNA-RNA interactions. Our ongoing research is focused on optimizing the RNA binding and inhibition of the activity of the T Box riboswitch of our initial lead compounds. To that end several conformationally restrained analogs of our initial lead compound are being prepared and studied. Our work is partially guided by molecular modeling and NMR binding studies.

Reactions of aziridines for the synthesis of heterocycles

A key aspect of our research program is the development of new methods and strategies for the synthesis of complex heterocyclic molecules. Many of these methods rely on the formation and reactivity of small strained heterocycles such as aziridines. We have developed a new type of fused ring aziridine which can be used for the preparation of multiple different heterocycles. We have also examined the use of aziridines in ring opening reactions with π-nucleophiles as a route to heteroatom substituted carbocyclic ring systems. Collectively this work provided new methods for the synthesis of heterocycles as well as providing insight into the reactivity of aziridines.