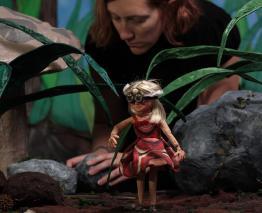 Kate Raney began animating in college when given an assignment to make a 1 minute animated film. She immediately connected with the materiality and process of animating. Initially focusing on reinterpreting fairy tales with a feminist subtext, she turned to appropriating imagery from modern myths - the movies. As a graduate student at UW Milwaukee, she moved away from 16mm film and began working in digital formats. Her current interests involve combining live action and animation to investigate gender representation in the digital age.

In addition to teaching and making art, Kate has also worked as a film programmer at the Union Theatre in Milwaukee, WI and assisted with programming for Block Cinema and the Onion City Film Festival.

Her work has screened at numerous festivals such as SXSW Film Festival, the Athens International Film and Video Festival, the Big Muddy Film Festival, and the Wisconsin Film Festival. In summer 2011 Kate was a Sponsored Artist at High Concept Laboratories in Chicago where she shot her current work-in-progress “The Cleo Project.” She has also been working with students on a grant-funded stop-motion short at Ohio University, geared toward getting K-3rd grade students excited about nanoscience.