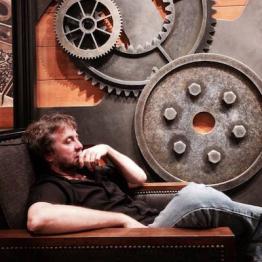 Prior to transitioning to higher education, Professor Lewis was, for 14 years, a producer, writer, director and program/production manager based in New England. During that span he worked in commercial, cable and public television, producing and directing everything from documentaries and public affairs programs to corporate video, commercials and Division I college basketball.

His independent documentaries have been seen on PBS stations throughout the U.S. and screened at more than 100 cultural/educational venues, including the National Gallery of Art, the Library of Congress, the Lake Placid Film Forum and the Explorers Club in NYC. These projects have taken him to Russia, Greenland, Argentina, Chile (sailing to Cape Horn), Denmark, Ireland, Newfoundland and Alaska.

Lewis is an internationally known authority on the life of controversial artist, adventurer, and social activist Rockwell Kent (1882-1971). Ann Hornaday, chief film critic for the Washington Post, wrote that his three-hour documentary on Kent “plays like a two-part installment of PBS’s American Masters,” calling it “a sweeping, detailed, visually rich portrait of a man who emerges as a complex, compelling and finally contradictory force of nature, a charismatic reflection of the eras in which he lived…”

Now at work on a definitive biography of Kent, Lewis has been an Arctic Studies Fellow at the Uummannaq Polar Institute in Greenland researching Kent’s two extended visits to the region in the 1930s. He has twice been a writer in residence at Landfall, an artist’s retreat in Brigus, Newfoundland that was Kent’s home in 1914-15.

A 2:49 marathon runner (back in the day), Lewis is the producer, writer and director of That Golden Distance, a regional Emmy-winning documentary about the Boston Marathon during the 1930s and ‘40s, and the author of Young at Heart: The Story of Johnny Kelley, Boston’s Marathon Man, published by Rounder Books.

Most recently, Professor Lewis wrote, directed and co-produced Paul Laurence Dunbar: Beyond the Mask. This two-hour documentary about the life and legacy of the first African American poet to gain national and international fame has aired on many PBS affiliates, screened at film festivals in Toronto, San Francisco, Los Angeles, New York and Paris, and been presented at the Library of Congress, the National Civil Rights Museum in Memphis, the Muhammad Ali  Center in Louisville, and the Atlanta History Center. More than a dozen of Professor Lewis’s former students made contributions to the project, filming at locations throughout the U.S., editing, assisting with research and composing music. The winner of a regional Emmy Award, major funding was provided by the National Endowment for the Humanities and Ohio Humanities.

For 18 years, Frederick Lewis taught MDIA 419, aka 419 Productions. This year-long program in advanced narrative production produced 62 short films and two full-length features, often adapted from the fiction of distinguished authors such as Richard Russo, Russell Banks, TC Boyle and Mark Twain. These projects, most 25-35 minutes in length, immersed 60-70 studen ts per year in all aspects of filmmaking, from script development, budgeting and fundraising to casting, location scouting, production, post production and publicity. Utilizing a structured film industry model, upperclassmen served in “above the line” roles as producers, directors and department heads, while freshmen and sophomores served in various “below the line” positions, learning the production process, preparing to assume leadership roles in their junior and senior years.

Over the nearly 20 years of its existence, many 419 projects won national and regional awards and screened at numerous film festivals. A variety of projects were shot all or in part on location in Canada, California, Michigan, South Carolina, Texas, Tennessee and Maine. Funds raised by the production teams over the years exceeded $500,000. Hundreds of students who worked on multiple 419 films have gone on to jobs in all aspects of the entertainment and corporate production industries at companies such as Lucasfilm, Scott Free Productions (Ridley Scott), American Dad!, Jim Henson Productions, International Creative Management (ICM), iHeartMedia, Dreamworks Animation, Laika and Teton Gravity/The North Face.

Each summer, Professor Lewis directs the Media School’s Screenwriting and Documentary Storytelling program in County Donegal, Ireland, a program he created in 2011. In 2015 he began directing a similar program in Seville, Spain during winter break. He has, to date, taken more than 250 students overseas, having also designed and directed study abroad programs and production projects in Germany, Morocco, Malaysia, Guyana and Ecuador.

For 15 years, Professor Lewis served as the founding faculty coordinator of Shootout, the Media School's annual 48 hour filmmaking competition. An average of more than 25 teams and more than 300 students take part in this event each year. When a small team of students won the competition with a Claymation project, Professor Lewis set up a Stop Motion Animation Workshop in the basement of Central Classroom, which he supervised for three years before closing it down. The Treeshaker’s Worry  and Nite Sweat served as the calling cards for several students who are now industry professionals.

A longtime practitioner of project-based learning, Frederick Lewis is a recipient of the Presidential Teacher Award, Ohio University’s highest honor for transformative teaching, curriculum innovation and mentoring. He is passionately committed to experiential learning. Quoth Confucius, “Tell me and I forget, show me and I remember. Let me do and I understand.”

Professor Lewis has been a Fulbright Specialist at the University of Pecs in Hungary, and a teaching fellow at the Northern Film School at Leeds Beckett University in Yorkshire, UK. He has professed in the graduate school of journalism at the University of Kiev-Mohyla Academy in Ukraine, and been a U.S. Embassy (Berlin, Germany) lecturer at Martin Luther University, Halle-Wittenberg and Freiberg University of Technology in Saxony.

After Malaysia elected a new government in 2018, promising to support a more robust media environment, the U.S. Embassy in Kuala Lumpur invited Lewis to design and facilitate a series of modules on film production aesthetics and scriptwriting for 25 media makers representing the Prime Minister’s Office, the Ministry of Foreign Affairs, and the Ministry of Defense, as well as several news outlets, NGOs and the U.S. Embassy itself.

Lewis has also conducted production workshops at Ho Chi Minh City University of Social Sciences and Humanities in Vietnam and at Babes-Bolyai University in Cluj-Napoca, Romania. He has also been a guest lecturer at Zhejiang University in Hangzhou, China and at the University of Versailles Saint-Quentin-en-Yvelines in France.