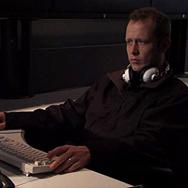 Tyler’s first experience in animation was creating hand-made flipbooks to entertain his friends in grade school. His passion for the art remained a hobby until he was exposed to digital animation while earning his undergraduate degree in visual communications from The Ohio State University. After graduating, Tyler worked in graphic design for several years but continued to experiment with animation in his free time. In 2004 he made the decision to pursue his love of animation and he returned to Ohio State for his MFA.

During his years as a graduate student he worked on multiple projects that helped hone his skills. As a proud member of the Ohio State Scoreboard Staff, he created graphics and animations, which are seen regularly at Ohio stadium, Value City Arena, and St. John’s Arena. Currently, The Ohio State Scoreboard Staff holds more IDEA Golden Matrix Awards than any other organization.

Soon after grad school he joined a team of students and professionals who, through animation, brought cartoons originally drawn by James Thurber to life. He was an artist and designer on thebakeryshop.org, an educational video game that won two Communicator’s Awards in 2010.

Tyler joined the faculty at Ohio University in 2009. He teaches 2D and 3D animation classes and also continues to freelance for several multimedia studios, helping to create short stories, advertisements and interactive experiences. He was also member of the IVIN project at Ohio University in 2009-2010. Currently, he is working as part of a team designing an educational video game that focuses on the earthworks in Newark, Ohio.

When Tyler is not teaching, he can be found with his wife chasing their three young sons around the house.