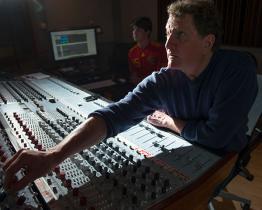 A native of Southern California, Eddie Ashworth is a thirty year veteran of the music industry and has produced, recorded or mixed innumerable albums and singles, including those by such popular international artists as Sublime, Pennywise, Izzy Stradlin (of Guns ‘n’ Roses), The Long Beach Dub Allstars, Tommy Shaw, Great White, Unwritten Law, Dokken, Frenzal Rhomb, Eastern Youth, Pink Noise Test, and many others. He has produced sessions in many major studios in the United States, as well as facilities in Japan, Australia, England, Denmark and Ireland.

He has continued his production career since joining the faculty in 2003, both at his private studio outside Athens as well as at The School of Media Arts and Studies’ own world-class multitrack recording studio, MDIA Sound. He is the recipient of numerous platinum and gold sales awards and is a voting member of the National Academy of Recording Arts and Sciences (NARAS), The International Association for the Study of Popular Music (IASPM), and the Audio Engineering Society (AES), Association for the Art of Record Production (ASARP) and, as a songwriter, is affiliated with Broadcast Music, Inc (BMI).  In 2011, Eddie was named to the Editorial Board of the Journal for the Art of Record Production (JARP) where he served as a Board Member until 2015.

In addition, in 2013 he co-developed and taught MDIA 5900 (Analog Audio Assessment and Preservation), a graduate level course that resulted in his traveling with his students to Georgetown, Guyana. The class worked with Guyanese archivists and media professionals to assess the condition and significance of critically endangered audio recordings of historical and cultural importance. (Eddie had previously conducted a sound workshop at the University of Guyana, which was sponsored by the Canadian International Development Agency [CIDA] Media and Democracy Project.)

Other Ohio University activities include tutoring students enrolled in the Honors Tutorial College as well as mentoring University College Learning Community student (as part of UC 1900 classes).
His research interests involve the influence of technology, commerce and culture on the creation of popular music, the history and development of the recording industry, the emerging post-modern music business, and  audio preservation and restoration. Creative activities include making records, playing music, and creative writing.

Journal for the Art of Record Production