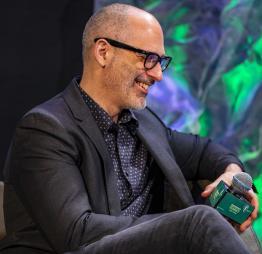 Josh Antonuccio has spent over two decades in multiple industry roles, as a music producer, musician, audio specialist, technology adventurist, studio owner, and media journalist. Originally from Pittsburgh, PA, he was the owner and operator of 3 Elliott Studio, a thriving music and post-production studio that served as his creative home since 2001. Josh has worked extensively in higher education for 15 years, establishing innovative music and media industry curriculums and developing the expansion of experience-based music industry education.

He has worked as a producer and engineer with a multitude of signed and independent artists and has worked on sound design for both short and feature-length films. With an abundance of both music and film credits to his name, his releases have been featured in various films, commercials, and TV shows, as well as news outlets including Pitchfork, NPR, Paste Magazine, VH1, MTV, The Onion/AV Club, Stereogum, and Magnet Magazine. He has been a member/producer of bands that courted signing deals with independent labels, including French Kiss Records (Passion Pit, Bloc Party) and Misra/Absolutely Kosher (Phosphorescent, Great Lakes Swimmers).

Josh was a music and media industry writer for PopMatters and has had his work featured in Fast Company Magazine, McClatchey News Service, Tape Op Magazine, The Journal of the Art of Record Production, Craftsmen Radio, and VH1. He is a frequent contributor to the regional NPR-affiliate, WOUB Public Media, providing coverage for national and regional music stories and interviews with national music figures.

He is the producer and host of "The Gladden House Sessions", a partnership with the Nelsonville Music Festival and WOUB Public Media, which allows MDIA students to produce live interview and performance sessions with national and regional artists. He has now produced over 90 episodes which has included notable artists such as Tyler Childers, Sierra Farrell, Big Thief, Lake Street Dive, and many others. In 2019, the show was nominated for a regional Emmy.  The series enters its' 7th year of production in 2022 with nearly 3 million views across past seasons.

He is the creator and director of numerous industry immersion courses at Ohio University including the OHIO South by Southwest trip, a class that brings Ohio University students to the largest national industry gathering in Austin,TX, allowing students to learn firsthand from those shaping today's music and media industries, the MDIA Production MasterClass Series, which give students an exclusive opportunity for in-studio apprenticeship education with industry leaders such as Jim Eno of Spoon (Austin,TX), Grammy-nominated producer/engineer Joel Hamilton at Studio G (Brooklyn) and 7-time Grammy winner Michael Brauer (NYC), and has led the Music Industry Masterclass at Bonnaroo Music & Arts Festival (Manchester, TN) and Forecastle Festival (Louisville, KY).

He is the director of the annual Ohio University Music Industry Summit, welcoming national and regional music industry leaders to Ohio University for panelist and performance programming. The Music Industry Summit enters its fifth year, being named one of the top 7 U.S. music conferences in 2022, as well as being featured in Billboard, All Access, SynchTank, and Hypebot. Past guests have included Phoebe Bridgers, Run The Jewels, Michelle Zauner of Japanese Breakfast, FINNEAS, Caamp, Saba, Chuck D, St. Vincent, as well as scores of leaders and change agents from across the music industry.

Josh is the faculty advisor of Brick City Records, the student-run record label in the School of Media Arts and Studies, as well as WIMI (Women in Music Industry), a student organization that provides networking and mentorship opportunities for female OU MDIA students pursuing careers in the music business.

He is a Grammy-Voting member of The Recording Academy, an ASCAP-affiliated songwriter (winning a new songwriter award in 2001), and sits on the Education Committee of AES (Audio Engineering Society). Josh also serves as a full member with the Columbus AES chapter.

His specialty in teaching includes core classes on the business of music; entrepreneurship; revenue streams of the emerging music industry, introductory, intermediate, and advanced music production and technology classes, as well as courses in sound design.

Josh helped to co-found the Immersive Media Initiative (IMI) in the Scripps College of Communication, made possible through a near-million dollar innovation grant from Ohio University. He assisted in the development of a new curriculum for XR production and oversaw the development of the audio production resources in the Game Research and Immersive Design lab. He and his team worked on ambisonic sound production and mixing for projects across numerous disciplines including film, music, health care, paleontology, journalism, and psychology. The IMI’s work with Virtual Reality in capturing real world emergency room traumas has been featured in numerous press stories including The Huffington Post, The Columbus Dispatch, and Cardinal Health and included work with The Better Lab at the Zuckerberg San Francisco General Hospital and Trauma Center.

He presented on his research with audio and virtual reality at numerous conferences including the Harvard Virtual Reality Health Care Symposium (2018), NYC Audio Engineering Society Summit (2018), and the Ohio Education Technology Conference (2018).

After her debut on Saturday Night Live, Josh and GRID lab staff worked with the Grammy-nominated artist Courtney Barnett to shoot portions of a main stage festival performance for VR.

Josh wrote the score and was the audio supervisor for the 360-degree Virtual Reality short film:  Re:Disappearing, which debuted in film festivals around the world, including: