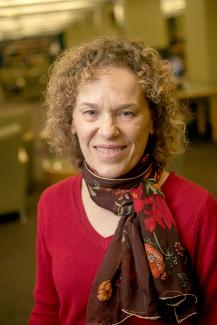 Dr. Carla Williams published her first book, “A Case for Charpentier: Treatise on Accompaniment and Composition,” in January 2021 through Indiana University Press. The book is a side by side transcription and translation of the French manuscript from the turn of the 18th century, which Williams translated and edited, as well as authored the introduction.

Williams is the music and special projects librarian at Ohio University Libraries and has completed the project after about a decade, during which she worked at two different university libraries and earned her doctorate in early keyboard performance.

“I worked on this for years and years,” she said, “I don’t know how long because it hasn’t been a continuous project but this has been definitely something that I wanted to finish. It felt important that I get it out there for other people to see.”

The manuscript itself, titled “Traité d'accompagnement et de composition,” was written by two authors who discuss musical elements of composition such as meter, tempo and major and minor modes. Although the identities of the authors have never been confirmed, Williams argues in the introduction that one of the authors was composer Marc-Antoine Charpentier.

“The mystery of who wrote the manuscript really caught me,” Williams said. “It’s an interesting topic and a great puzzle. It was undated and anonymous until, of course, we discovered who the second hand was.”

The manuscript is housed with other rare books in the Lilly Library at Indiana University. Williams worked at the William and Gayle Cook Music Library at Indiana University for 15 years before coming to Ohio University. As a music librarian with an interest in rare books, Williams said this project was a great intersection of her interests and that she learned a lot during the process. She said that she hoped the book helps make the unique manuscript more accessible for the scholarly community and a broader audience, as well.

“The main purpose was to get it out there so that people could see it,” she said. “That’s why I chose to do the transcription.”

Williams said that anyone with a similar background in music performance or music history like her would likely be interested in the book. It may also interest those who study early music theory or Charpentier. Williams hopes that the translation and her introduction can help fill in some of the knowledge gaps that exist around 17th and early 18th century accompaniment and composition.

In “A Case for Charpentier,” Williams provides a full physical description of the manuscript, provides hand-drawn copies of the watermarks that appear in the manuscript and compares the writing to some of Charpentier’s other works and handwriting.

“I had help with the attribution [to Charpentier],” she said. “I wouldn’t have known without the help of Charpentier scholars and scholars of Baroque French writing. There’s a big list of people that helped me because I went to experts for language and music theory of the time. I kind of felt like a fish out of water at first, and I am so, so grateful for the kindness of all of these people.”