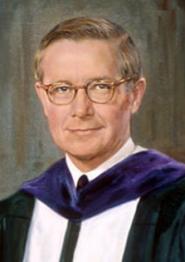 Vernon Alden, Ohio University’s president from 1962-69, celebrated his 95th birthday in April of 2018. Alden, who throughout his entire presidency, campaigned for a new library, continues to be a special part of Alden Library, which was named in his honor. During his presidency, both enrollment and private donations increased to support the institution. To honor the Library’s namesake, Ohio University Libraries produced a video interview of Alden to share his incredible story.

The following is an article that was written around Dr. Alden's birthday, with observations and remarks from former dean of libraries Scott Seaman.

At one point, Seaman turned to Alden and told him how happy he was to work at “OU.”

Seaman, confused, began to explain when Alden informed him the University was called Ohio University, not “OU.”

Seaman added Alden corrected the reference often. “It was always very funny and very polite,” Seaman said. “It never insulted anybody, but it drove home an important point about what he thought about this campus: We’re distinct. We’re Ohio University. And ‘OU’ doesn’t capture who we are.”

Although Alden did not believe “OU” properly captured just what the University stood for, Alden himself may do just that.

Alden, who served as the University’s president from 1962-69, celebrates his 95th birthday on April 7, 2018. Alden continues to be a special part of Alden Library, Seaman said. Each year the Library staff sends Alden, who now spends most of his time at his home in a suburb outside of Boston, birthday greetings, this year including a special set of cards, to honor and thank him for his continued support of the Libraries.

Seaman added Alden recognized the importance of a highly functioning campus library early on, even petitioning in his inaugural address for a new building to replace Chubb Library, the then-current library that had become too small to serve the growing student body.

“We have this very large building to thank him for,” Seaman said. “Vern was very persistent; he began asking the legislature and began piecing together the funding right when he became president. It was not until 1967 that the building was really underway. It took his entire tenure as president.”

Alden has continued to support the Alden Library, as it evolves to include more modern technology.

“Vern is very sophisticated in terms of understanding modern libraries,” said Seaman. “He knows that libraries are about more than books today.”

Alden’s support of Ohio University extends far beyond the walls of the Library that bears his name, however. After he became president in 1962, the University’s operating income, undergraduate enrollment and private-donor annual gifts all increased. Due to the greater number of students on campus, Alden led the way in the development of several other campus buildings.

Along with his work at OHIO, Alden, during his time as president, worked with many highly ranked government officials, including United States President Lyndon B. Johnson, who named Alden chairman of the Task Force Planning Committee of the United States Job Corps in 1964.

Alden, among many other things, helped establish several innovative and important academic groups such as the Honors College, the Cutler Program of Individualized Study, the Ohio Fellows and the Ohio University Press.

To celebrate Alden’s 95th birthday and the new renovations to the Library’s display featuring him, through the help of Andie Walla, a lecturer of video production in the school of media arts and studies, a video interview of Alden was created. To film, Walla and Seaman visited Alden over the summer.

“We had the privilege of just hearing him talk about his history,” said Walla, who has interviewed Alden other times through work for University communications and marketing. “He’s such a charming man; it is always a pleasure to listen to him.”

She added that although Alden Library has evolved in the decades since Alden’s tenure, thanks to Alden’s determination and the strong foundation put into the Library in its early stages, the building remains the center of college life for students.

“He has so much energy just in his presence. It’s hard to believe he’s going to be 95. He remembers things so clearly…it is really impressive,” said Walla. “Dr. Alden is one of so many great people we have [who] have made Ohio University what it is today.”

Seaman and Walla also spoke to Alden about the renovations taking place at the Library and along with her creating his birthday video, Walla’s students in her MDIA 4904 class created a second video to honor Alden, highlighting the changes to the Vernon Alden display, now on the second floor of the Library.