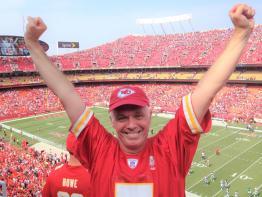 Roger credits his mother for his love of media and his father for loving what he does for a living. He grew up in a small Arkansas town with an inexplicable interest in the business of media and followed that passion to his present position in the School of Media Arts and Studies. Along the way, Roger worked professionally as a sportswriter (five years) and as a creative director at an advertising agency (two years). He spent a year in Japan as a Fulbright Scholar, followed by six years as a consultant for Japan's National Association of Commercial Broadcasters. He has taught and/or presented research in Australia, Qatar, Denmark, the UK, Singapore, Thailand, Malaysia, and the Ukraine. Roger came to Ohio University in 2004 following 12 years at Texas Christian University and served as School Director from 2005-11.

Roger's current work focuses on the personality attributes that lead to success in media and creative professions. His book, 12 Attributes of Extraordinary Media Professionals: How to Navigate Your Road to Success, will be published by Rowman and Littlefield in 2019. He also published research involving cross-platform media behaviors with Tang Tang (an Ohio U. Ph.D. graduate) in recent issues of Mass Communication and Society, International Journal of Sport Communication, and Journal of Sports Media. Roger’s publications also include Communication Theory, Journal of Broadcasting and Electronic Media, Journalism Educator, Journal of Media Education, Journalism and Mass Communication Quarterly, and Media Management Review.

Roger has been Director of the OHIO-in-LA Program since its inception in 2014. He teaches classes in Los Angeles, facilitates relationships and excursions, and oversees internships for 20+ students in LA during the Fall semester and Summer term. He teaches The Business of Media and Mass Communication Theory each Spring semester at OU.

A die-hard (die-often) Kansas City Chiefs fan (and season-ticket holder), Roger loves funk music and is fascinated with stand-up and improv comedy. He considers Richard Pryor to be a true genius, has watched each episode of Seinfeld at least 643 times (only a slight exaggeration), and considers a 1976 Tonight Show appearance by Steve Martin to be a transformative event. He created the course, Leadership and Humor for the Creative Industries, as part of his University Professor Award, and attends shows at The Groundlings and The Comedy Store in Los Angeles every chance he gets.