Ike Riesbeck, graduate of the ITS Program, finds work at Cisco 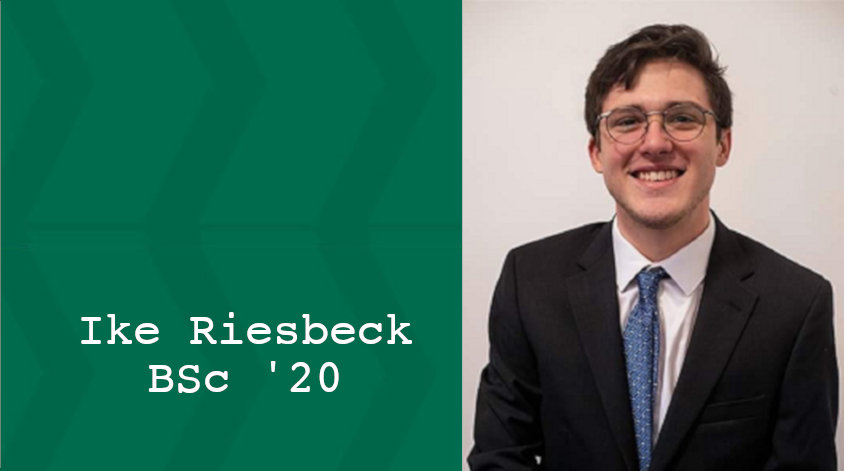 Ike Riesbeck, a graduate from OHIO’s ITS program, has been working at Cisco for over six months as a systems engineer, helping a multitude of businesses in achieving their goals.

Riesbeck graduated in May of 2020 with a major in ITS and a minor in business. Riesbeck was originally a theatre performance major, but during his second semester at OU he transferred to the ITS program shortly after Doug Bowie informed him of the program.

Riesbeck found the opportunity to work at Cisco through recruiters that visited OU during an encryption class he had his senior year. The hiring process featured multiple interviews, virtual and in-person, that spanned over four months; Riesbeck applied for Cisco in November 2019 and was notified that he had gotten the job in July of 2020.

At Cisco, Riesbeck works in the sales division as a systems engineer. His responsibilities lie in helping corporations reach their business goals using technology. He, along with his account managers and coworkers, utilize a multitude of emerging technologies to help businesses achieve their goals.

The goal of the program is to take people from a variety of backgrounds and put them on a track to become part of the IT workforce in a year. The first six months are composed of a bootcamp to familiarize employees with terminology and the intricacies of their program and their profession, while the following six months are designed to incorporate the employees to the infrastructure of Cisco to give them a hands-on experience.

Riesbeck states that his role is to have knowledge that is, “a mile wide and an inch deep.” He feels that, as a generalist, it is imperative for him to know what IT is at a business view and to know the components that are responsible for making his sector and the internet as a whole run.

A day at Cisco for Riesbeck generally consists of studying for certificates, attending panels, having one-on-one meetings with coworkers and working closely with his team. Riesbeck says that he enjoys the flexibility that Cisco offers him, and he appreciates that he can create his own schedule. Riesbeck also stated that Cisco has made the shift to working at home seamless and stress-free. Riesbeck made a particular note that the work culture at Cisco is very friendly and values inclusivity, and that there is a heavy importance on giving and receiving critical and meaningful feedback.

Within Cisco there are numerous sectors with varying tasks. There is a public sector, which focuses on civilian use, an enterprise sector, a commercial sector, a sector for internet service providers and a sector with interests of the web. Generally, employees stay within one sector

Riesbeck intends on staying at Cisco for the future and further expanding his knowledge in the field of IT. He says that he also has interest in moving out west to the Silicon Valley one day, and that he would like to work in a field role.

Regarding advice for current students, Riesbeck believes that students should make the most out of the ITS curriculum, and that paying attention and having the knowledge from the classes does go a long way. He also advises students to attend out of class clubs and events, such as BNIC and other student organizations.