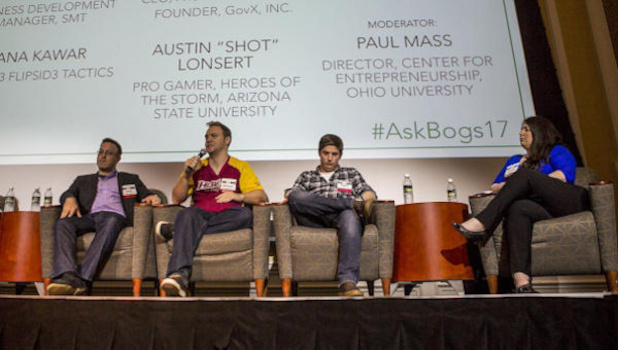 On February 23, the Ohio University Business of Games Summit is hosting a virtual event on Twitch that will be available to the public.

The event will be held from 10:15 a.m. to 2 p.m. During this time, the summit will have speakers from various backgrounds focusing on game development and esports, as well as giving insight to the industry.

This will be the third Business of Games Summit. The past two were held in-person in 2017 and 2019.

One of the main attractions in past summits was the ability to test out games and VR/AR technologies in person. While this is not a possibility physically, the summit will still showcase upcoming projects and industry innovations. The virtual summit also holds the opportunity for students to ask questions to OHIO alumni, game developers, or people who work in the industry in real time. The ease of communication will be a key difference between this year’s summit and past summits.

The event will begin with welcoming remarks from Paul Benedict, John Bowditch and Scott Titsworth. Shortly after, Chris Volpe will speak on the state of the video game industry. There will be a short break and then Gary Gardiner will speak for 45 minutes. Topics that will be covered vary from esports to an insider’s look on the video game industry.

The event will be hosted throughout by DJ A-Roc, who will DJ for the half-hour break at noon.

The summit will then have two more speaking sessions. The first following the break will be given by various Ohio University alumni with careers in the gaming industry discussing the emergence of esports, and the second will be given by keynote speaker Matt Benson, who is the CEO of eFuse, a gaming social media company. He will be speaking about how to take the interest and hobby of gaming, and how to turn that hobby into a career.

Anthony Zoccola, who helped organize the summit and who is a GRID Lab manager and instructor at Oho University, said that accessibility and connectivity were imperative to the design of this year’s summit. He stated that it is important to showcase that there are realistic career paths in the video game industry for those interested.

Going forward, Zoccola said that there is interest in utilizing a hybrid model for future summits.