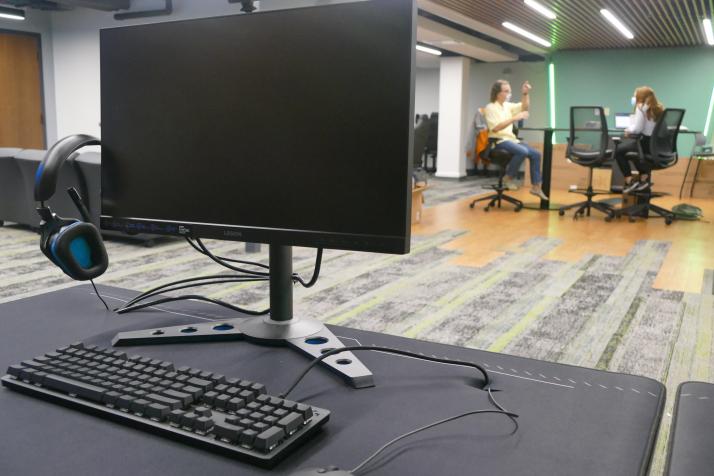 In Sept. 2020, construction began on the esports competition facility housed in Scripps Hall that will be launched in Spring 2022. The facility features practice and tournament spaces for Ohio University students and visiting teams, high-end gaming PCs, and the latest software development tools. The space will be used for varsity and club esports competition play, community use, and esports course instruction.

The J. Warren McClure School of Emerging Communication Technologies has joined the project, assisting in the operation of state-of-the-art networking and streaming technology in the facility. Brandon Saunders, Information and Telecommunication Systems professor, has spent the past year designing the broadcasting system for the esports facility.

As esports is a rapidly growing industry and uses streaming technologies to reach broader audiences— which offers viewers an inside look at game competition— the implementation of streaming was a vital component to the esports facility. Saunders, interested in audio and video technologies, has worked on streaming projects before and has combined his different experiences throughout the design process of the esports broadcasting system.

The broadcast system consists of multiple computers that work in tandem to produce streaming content throughout a competition. In the production room, there will be multiple machines focusing on different components of the stream.

Saunders decided to use top-of-the-market video switching equipment made by the company Black Magic that will control switching cameras to capture different video angles of the game. The cameras, also industry-leading, are set up to capture views of the home and away teams, the announcers’ desk, and expressions of individual players in high-definition. With the help of Chip Linscott, ITS Virtual Reality Professor, the esports facility will feature high-quality 360-degree video and audio equipment. Mounted in the middle of the competition space, the gear will allow viewers with VR equipment to view games live from home.

All of the equipment used is connected to a single PC unit in the production room through inputs and outputs. In addition to cameras, the PC is able to control audio and editing during competition. This will give producers the ability to edit overlays, like game scores and game updates, onto the stream. The system was designed to bring multiple elements together to create one single stream.

Saunders’ simple system design allows the broadcasting system to be used easily by just one person. While the PC will control certain aspects in the production room, one person will be able to control the entire stream at the announcers’ desk with the implementation of the Elgato Stream Deck control system. The Stream Deck has a myriad of uses but it has become a very popular and frequently utilized piece of equipment in the game streaming world.

A difficult task in game streaming is capturing the players’ view inside of the games, which is an important aspect for viewers. Saunders decided that the addition of an observation monitor software would be the perfect solution. The software is part of the game’s system and functions similarly to the game players. This “player” will be able to follow team players throughout the game and let viewers in on the action.

With Saunders’ system design and the technology in the esports facility, the production of streaming will advance in time and be very flexible for different uses in the future. Once Central Processing Units are added to the system, Saunders is hopeful that the esports facility will be one of the most powerful compute environments in Southeastern Ohio. The facility will then be useful to more departments at OU, not just esports.

Departments interested in creating high-end computer graphics, broadcast content, or podcasts will be able to use the space. The addition of these different elements will not only give esports the ability to expand in production quality of competition streaming but allow other departments to create using the technology. As the launch of the esports facility approaches, Saunders is excited about the various uses the facility has to offer to students and faculty of all majors at OU.

The McClure School of Emerging Communication Technologies strives to offer the best academic programs in the IT, the game development and the Virtual Reality/Augmented Reality (VR/AR) industries. Our programs and certificates cover numerous aspects of the rapidly changing industries of information networking, cybersecurity, data privacy, game development, digital animation and the academic side of esports.