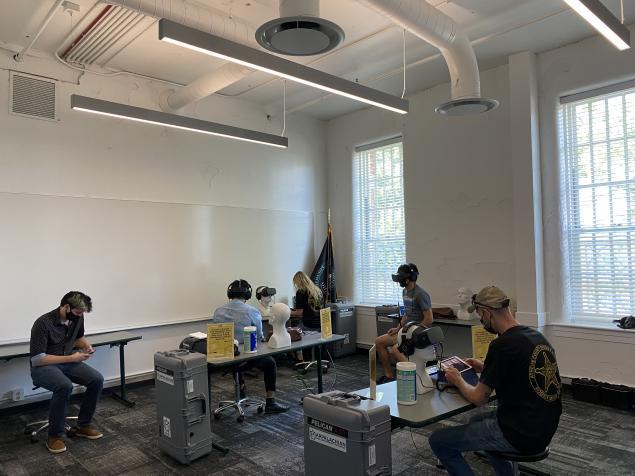 The Athens Police Department, in conjunction with the Voinovich School and Scripps College of Communications, hosted an event at The Ridges showcasing virtual reality technology that is being utilized by various Appalachian Police Departments for public good.

The technologies showcased utilized an over the head VR headset with noise cancelling headphones. The software pre-included with the headsets provided situational training for members of the Appalachian Police Departments. The training ranges from mental health matters to racial injustice.

These headsets bundled with training simulations are being loaned out to various Appalachian Police Departments, which are often poorly funded and do not have access to technologies such as what were showcased.

There were three situations that were showed at the event.

The ‘Dion’ simulation showed the story of two black men at a bar. The purpose of this situation was to show the racial injustice that can be shown by police officers. The simulation also showcased what language can be used or altered to prevent a hostile environment. This simulation lasted around 10 minutes and granted the user complete 360° view of their surroundings, being able to view bystanders and the complete environment. The technology achieves its goal of immersion, and its effectiveness lies in the fact that the situations are very real for many individuals.

The second situation, the ‘Chet Situation’ showcased a man with PTSD who was a danger to himself. This situation showcased two different outcomes: an outcome where the police were informed how to deal with a mental health crisis, and one where the police were not. The simulations were presented in this manner, showing how a situation can be resolved in a more effective manner. This situation heavily focused on de-escalation techniques that police officers can employ.

The simulations were filmed and produced over the summer by students of The Ohio university Game Research and Immersive Design (GRID) Lab, and the scripting was done by Eric Williams, a professor at the McClure School of Emerging Communication Technologies. At the event there were representatives present that worked on the audio and visual aspects of the project. There were also representatives from the Athens Police Department, including County Sheriff Rodney Smith.

The third simulation showed was of a black man sitting outside of the Athens Courthouse shortly after a Black Lives Matter protest took place, when he was accosted by a police officer. The simulation shows both how this altercation can go poorly, or how the differences can be respected. The simulation showed that there is often an ideological divide between protestors and the police, but that this is a divide that can respected and can lead to a higher trust in the police by the public.

There was a final short simulation to wrap things up. This event showcased the same actor from the ‘Dion’ and Courthouse simulations at a routine traffic stop. This simulation showed how his previous interactions with the police influenced his behaviors and anxieties; it was showed that he was afraid to reach for his inhaler, because he was uncertain how this action would be perceived, for example. On the contrast, it showed how if the police were more aware with their language and demeanor toward him in the past, he would not have been as intimidated of the police officer conducting the routine traffic stop.

The rise of immersive storytelling and its availability has been effective in various rural Appalachian Police Departments thanks in part to the work at the university, and the work provided has the potential to provide better policing and better training for many.