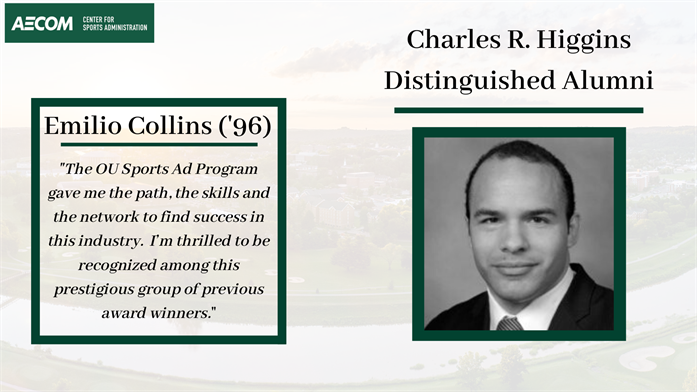 “It’s an incredible honor to receive the Charles R. Higgins Distinguished Alumnus award for 2020. My memories of interviewing with Doc Higgins nearly 24 years ago are still fresh in my mind. At the time I had no idea what I wanted to do within sports. The OU Sports Ad Program gave me the path, the skills and the network to find success in this industry. The program opened up doors for my first roles in the business, and the phenomenal alumni base has been a consistent anchor throughout my career. I’m thrilled to be recognized among this prestigious group of previous award winners."

Collins joined Excel after 15-plus years at the National Basketball Association, where he most recently served as Executive Vice President, Global Marketing Partnerships, overseeing the league’s marketing partnerships business globally, including partner management, business development, marketing solutions and media. Under Collins's leadership at the NBA, his department doubled global sponsorship revenues and secured a record number of league marketing partnerships, including recent new relationships with PepsiCo and Tissot — the first-ever leaguewide partnership.

From 2008 to 2010, Collins served as Senior Vice President of International Development, managing the development of the league's international business, including sponsorship, international games and new league initiatives.  Previously, Collins served as the NBA's Vice President of Global Marketing Partnerships, overseeing many of the league's major marketing partnerships.  Collins began his NBA career as an account director in the marketing partnerships group in 2001.

Prior to joining the NBA, Collins worked as Director of Event Development at SFX Sports Group, where he built and managed the company's golf, consulting, hospitality and tennis events business.  He joined SFX in 1999, when they acquired Integrated Sports International, for which Collins had been working since 1996 as a director and manager of special events.  Collins began his career as an event manager at Promo One, a New Jersey-based event marketing agency.

Collins is involved in a variety of community volunteer projects, including youth mentoring, the Harlem Educational Activities Fund, and TopSpin Charity, an annual sports industry nonprofit which benefits youth education.  He is also a member of the Alumni Advisory Board at the Ohio University Sports Administration Program.  In 2012, Collins was recognized as a Forty Under 40 recipient from the Sports Business Journal.

Collins graduated from Michigan State University, where he was also a two-time NCAA Division I All-American wrestler, and holds a master's degree in sports administration from Ohio University.

Collins resides in Brooklyn, N.Y. with his wife Kate and their two daughters, Naiyah and Zadie.