Walter O'Malley: History of the Founder 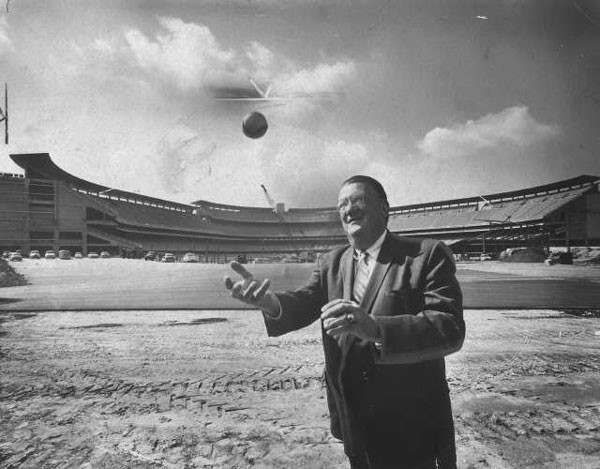 Walter O'Malley was a man of many talents. As a baseball pioneer, he foresaw the expansion of baseball to the West Coast, moving the Brooklyn Dodgers to Los Angeles before the 1958 season. An owner ahead of his time, O'Malley oversaw the development and construction of the innovative Dodger Stadium in Los Angeles.

The genesis of the Ohio University Sports Administration Program and O'Malley's influence can be traced back to New York. In the 1950s, O'Malley and Dr. Clifford Brownell, a professor at Columbia University, conversed on several occasions about the business of baseball. Always the pragmatic businessman, O'Malley lamented the lack of properly trained administrators for the Brooklyn Dodgers, the organization of which O'Malley had been majority owner and general partner since 1950. More specifically, the Dodgers were lacking in well- trained individuals for the team's business-related areas. Wouldn't it be something, O'Malley reflected, if a university could train students, in areas such as contract negotiation, facilities management, and marketing, which could contribute to more efficient and effective sports organizations like Dodgers?

Remembering these conversations, Brownell later recounted them to a young James Mason, a doctoral student whom Brownell was advising at Columbia. After receiving his doctorate, Dr. Mason took O'Malley's revolutionary idea and brought it to life, founding the world's first sports administration program at Ohio University in 1966.

From its nascent days in the mid-to-late 1960s to present day, the sports administration program developed a reputation as the place for aspiring sports executives to gain industry knowledge to build the foundation for their future jobs in the sports and entertainment industries. Mason's successors have continued to shepherd the Program through the years, furthering the reach and impact of O'Malley's original idea. As a result, the Program has produced hundreds of executives that work in today’s world of sports.

The influence of Walter O'Malley on baseball is well-known and celebrated. Indeed, the face of modern baseball owes a great deal to his innovative ideas, be it in the international outlook of the game, in the ageless grace of Dodger Stadium, or in the expansion of Major League Baseball on the West Coast.

In December 1999, Sporting News named O’Malley the 11th Most Powerful Person in Sports over the last century, while ABC Sports ranked O’Malley in its Top 10 Most Influential People “off the field” in sports history as voted by the Sports Century panel. Major League Baseball paid tribute to the late O'Malley when he is inducted into National Baseball Hall of Fame in July 2008. O'Malley was enshrined in an executive class that also includes a former commissioner, two former managers, and the inaugural owner of the Pittsburgh Pirates.