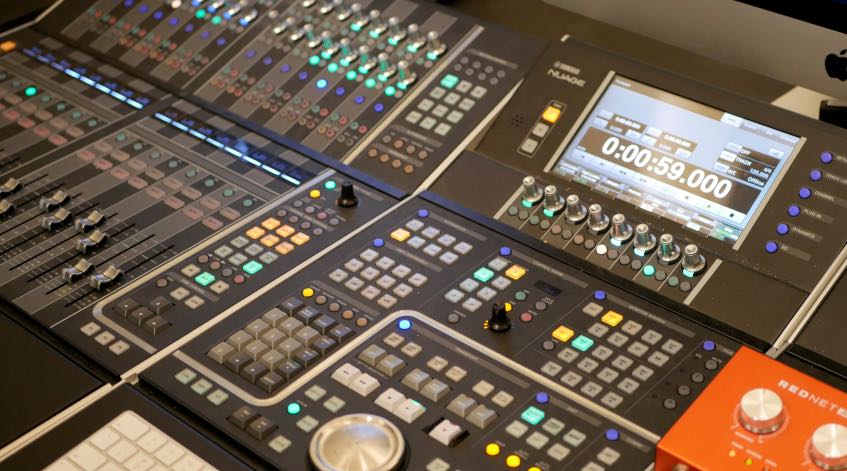 When walking through Scripps Hall, visitors are met with what appear to be traditional classroom settings and lecture halls but behind these doors houses top-of-the-line virtual and augmented reality production facilities. The GRID Lab, located on the third floor, includes special and immersive audio production suites, VR, AR, and immersive design facilities and cinematic VR 360 video production rooms.

The Audio Suite is one of the most important components of the GRID Lab. In the suite, students and faculty work to produce audio that moves with users. By integrating well-produced audio with state-of-the-art software, like the Yamaha Nuage control board, to virtual and augmented reality experiences, producers can assure users are fully immersed. Charles Linscott is the Audio Director of the Audio Suite and has been overseeing production in the space since 2017.

Before the construction of the Audio Suite, the McClure School worked on the Immersive Media Initiative which allowed the school to expand its facilities to create more advanced virtual reality experiences. Josh Antonuccio, Director of the School of Media Arts and Studies was the initial director of the Audio Suite and oversaw its construction alongside John Bowditch and Eric Williams.

Since construction, students and GRID Lab faculty members have worked on numerous virtual and augmented reality projects and grants, including the Medicaid Equity Simulation Project, PACE and ELI. For these grant projects, the audio suite produced sound collected on project sets similar to film audio. The recording software, microphones and editing processes, like ambisonics, on these sets are specific for VR production.

On top of productions that immerse users in characters’ daily lives, the audio suite creates specialized audio for video games. ATHEMOS is a virtual reality space shooter video game that aims to help middle school students who struggle with ADHD. Students who are interested in this type of audio production have the chance to use top-of-the-line technology in the Audio Suite space to enhance their skills. The McClure School has facilities, unlike any other undergraduate institutions, for students to begin working in their desired profession right when they walk in the door.

The McClure School of Emerging Communication Technologies strives to offer the best academic programs in the IT (Information Technology), the game development and the Virtual Reality/Augmented Reality (VR/AR) industries. Our programs and certificates cover numerous aspects of the rapidly changing industries of information networking, cybersecurity, data privacy, game development, digital animation and the academic side of esports.