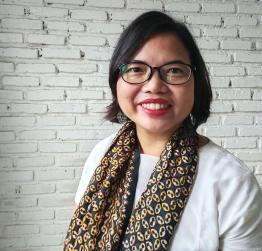 Doctoral student Ratna Ariyanti is also on the teaching staff at the Multimedia Nusantara University in Banten, Indonesia (the greater Jakarta area). She teaches Business Journalism, Reporting Issues of Diversity, and Global Journalism.

She received her B.A. in Mass Communication from Sebelas Maret University, Indonesia, in 2002, and M.A. in International Journalism from the University of Leeds, United Kingdom, in 2015, sponsored by the British Chevening Scholarships. Her doctoral study is sponsored by Indonesia’s Education Ministry and Fulbright under the program called DIKTI-funded Fulbright Grants for Indonesian Lecturers.

She developed a passion for journalism when she was a young girl. Her neighbor owned a newspaper stall and always allowed her to read the papers and magazines for free. She then enjoyed “traveling” from one place to another just by reading various stories from around the world.

Before pursuing a career in academia, she worked as a journalist for Indonesia’s largest business and financial newspaper, Business Indonesia, for more than 10 years. She covered various beats, from the stock exchange, information and technology, manufacturing, and politics — where she was assigned at the Presidential Palace.

Ratna has been a board member of Indonesia’s progressive journalists’ union, the Alliance of Independent Journalists (AJI), since 2009. She was involved in various programs with AJI, including data journalism training and hackathons, safety trainings for journalists, Indonesia’s whistleblower platform IndonesiaLeaks, and CekFakta, a fact-checking collaboration supported by dozens of media outlets in Indonesia.

Her doctoral research is focused on collaborative journalism and examines factors that contribute to both the success and failure of collaboration projects among newsrooms in Indonesia and cross-border partnerships.

Ratna has published two works with the Alliance of Independent Journalists (AJI) in Indonesia — “Jejak Jurnalis Perempuan (the Path of female journalists)” in 2012 and “Safety protocol and guidelines for journalists covering the Covid-19 pandemic” in 2020.  She also has three publications with the International Federation of Journalists (IFJ) in Asia Pacific — “Underneath the Autocrats: A Report into Impunity, Journalist Safety and Working Conditions” in 2018, “Holding the Line: A Report into Impunity, Journalist Safety and Working Conditions” in 2019, and “Challenges and Controls: Impacts of Covid-19 on Media Workers in Malaysia” in 2020. She master’s thesis at the University of Leeds is titled “Exploring social media in journalism: a study of the use of Twitter as news sources in the coverage of recent crisis event in Indonesian online media” from 2016.

In addition to her studies, Ratna is a cat person and is surrounded by seven adopted cats.