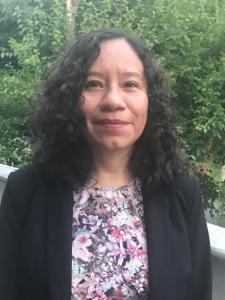 Lenny is from Mexico and grew up in Oaxaca and the Yucatan Peninsula.  She has two master’s degrees, one in Spanish from West Virginia University and another in Latin American Studies from Ohio University. Currently, she works as a Teaching Assistant for two sections of the JOUR 1010 The Future of Media course.

She has studied and lived in the three countries members of the North American Free Trade Agreement (NAFTA) Mexico, the U.S. and Canada, and for this reason, decided to do her research on NAFTA in political cartoons. She is also interested in the influence of NAFTA, which goes beyond economy: its policies influence the culture of the three countries. She chose political cartoons because she became an avid newspaper reader as a child thanks to cartoons.

Political cartoons have a long combative tradition in Mexico and are popular among all generations. Imagery in Mexico has very strong roots to its pre-Columbian civilizations, which used hieroglyphics for visual communication. Therefore, imagery was also used by the Spanish priests to educate the indigenous populations in Colonial times. The three North American countries still have indigenous population communicating in their own languages, and imagery remains a bridge to communicate with them and other vulnerable sectors of the population. Political cartoons can work as that bridge. Unfortunately, censorship against cartoonists is also present in the three countries. Due to those facts and more, Lenny believes political cartoons are worth studying.

Lenny has presented at academic conferences, including the 21st Latin American Social and Public Policy Conference at the Center for Latin American Studies at the University of Pittsburgh in 2017 and at the Congress for Humanities and Social Sciences at University of British Columbia in 2019 with the Canadian Society for the Study of Comics and La Asociación Canadiense de Hispanistas. She also presented at the Festival Audiovisual Feminista organized by the collective Reflexión y Acción Feminista in Merida, Yucatan, Mexico in 2018. She was a guest lecturer for the study abroad program from De Paul University in Merida in 2018. Her essay Trans-Hemispheric Artivism: Mexican and Latinx Grafica was included in the journal Prose Studies recently.

In her free time, Lenny likes writing fiction. She published on the feminist online Latin American magazine Feminopraxis. Lenny also worked as a freelance reviser and translator of comics and graphic novels for IDW Publishing.