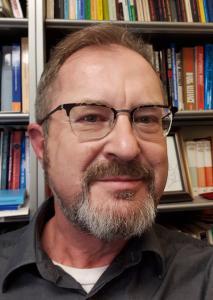 In July 2016, he was named Director of the Institute for Applied and Professional Ethics (https://www.ohio.edu/appliedethics/). He has also been serving as the Director of Studies in the Honors Tutorial Journalism program since Summer 2005 and he is the coordinator of the Ohio-Leipzig Double Master’s Degree Program in Journalism and Global Mass Communication. In addition, he is one of five co-editors of the new bilingual (German-English) scholarly journal Journalistik/Journalism Research.

Director of the Institute for Applied and Professional Ethics

Professor for Multimedia Policy at the E.W. Scripps School of Journalism (since Fall 2010)

Director of Studies in the Journalism Honors Tutorial Program (since 2005)

IAPE Visiting Professor of Ethics and Communication at the College of Communication and the Institute of Applied and Professional Ethics (IAPE), Ohio University (Fall/Winter 2000-01);

Bernhard Debatin has authored or edited eight books, among them a workbook on Journalism Ethics for Professionals (2014) and a book on metaphor theory (1994), as well as edited volumes on the Mohammed cartoon debate (2007) and on media ethics (2003). He has published more than 80 scholarly articles in academic journals and books on media ethics, privacy, philosophy of technology, social media, language and semiotics, and mass media and the public sphere. He has been a keynote speaker and presenter at numerous conferences and events, both nationally and internationally.

Bernhard Debatin’s professional experience includes work as a communications consultant at the DaimlerBenz Research Department (Berlin, Germany, and Palo Alto, CA, 1996), as well as longstanding work as a freelance journalist at a variety of German newspapers and magazines, writing on political and environmental issues (since 1982). He was also founder, editor, and writer of the German city magazine Katz (1976-79).

In addition, he is an avid photographer, focusing mostly on environmental, landscape, and nature photography. He enjoys exploring the region through hiking, driving, and canoeing. Through exploration, research, and collaboration with local watershed groups, he has become an expert in the history and the present of resource extraction and its social and environmental impact in Southeast Ohio. This allowed him to develop his place-based approach to teaching environmental and science journalism. He also offers environmental field trips of the region for students, faculty, and friends.

Honors Tutorial College Research Apprenticeship Grant for academic year 2017-18, consisting of $3000 for an undergraduate research apprentice to help with research project on “Ethics of Compassion and Journalism.”

Grant from the Scripps College of Communication, consisting of $2760, to co-sponsor the Spring 2016 Lecture by Naomi Oreskes and screening of her film “Merchants of Doubt.”

Grant from the Scripps College of Communication, consisting of $4,960, to co-sponsor the Spring 2014 conference “A Region Reflects, in celebration of the 50th anniversary of LBJ’s war on poverty”

Recipient of the 2012 “Outstanding Tutor Award” from the Honors Tutorial College.

Honors Tutorial College Research Apprenticeship Grant for Summer/Fall 2011, consisting of $3000 for an undergraduate research apprentice to help with research project on “The Ground Zero Mosque Debate.”

Voinovich School Undergraduate Research Scholar Award for 2010/11, consisting of $3,300 for a research assistant to help with research projects “Little Cities of Black Diamond” and “Coal Mining in Athens County.”

Honors Tutorial College Research Apprenticeship Grant for Winter 2010, consisting of $3000 for an undergraduate research apprentice to help with research project on “Coal Mining in Athens County.”

Voinovich School Undergraduate Research Scholar Award for 2009/10, consisting of $3,300 for a research assistant to help with research project on “Coal Mining in Athens County.”

Ohio University 1804 Fund Award (Aug. 2008) consisting of $9,500 for the teaching project “Localizing Environmental and Science Journalism,” a learning-community-based course with field trips and workshops with a focus on regional issues, particularly the coal mining industry

Research fellowship from the International Centre for Studies in Culture and Technology at Stuttgart University (Germany), consisting of 22,500 Euro for the Spring/Summer Semester 2006.

Co-Winner of the Hans Bausch Media Award (Foerdergabe), 1999, endowed with DM 5000 and given biennially to one or two recipients by the German radio broadcasting company SWR. This award recognized his academic work in media ethics.

German federal HSP-III grant (ca. $40,000), 1998-2001, for setting up a multimedia lab at the Leipzig University and for developing and implementing the web-based learning environment Distance Learning Propaedeutikum.

Masters degree awarded with the notation “sehr gut” (1.0, equivalent to a 4.0 GPA in the United States) at the Free University Berlin, 1988

Member of the advisory board of Ohio University’s IAPE (Institute for Applied and Professional Ethics), 2012-2016.

Member of the editorial advisory board of the International Review of Information Ethics (IRIE), since 2008.

Served as vice chairman of the university-wide multimedia/distance learning committee at the Leipzig University, 1998-2000.