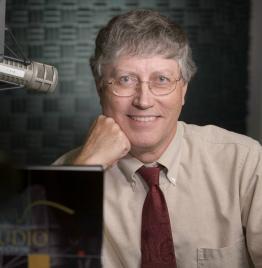 Dr. Ken Collins holds a Ph.D. in Speech Communication with an emphasis in Radio-TV-Film and an M.A. in Popular Culture from Bowling Green State University and is a tenured associate professor.

At both the University of Cincinnati and Ohio University, Dr. Collins taught a variety of courses such as radio news writing, precision language, public relations, audience research methodologies, audio and video production, and overview of the mass media.

As a working news professional, Dr. Collins delivered newscasts at a variety of broadcast stations in Ohio, including WSPD-AM-TV, Toledo, and WTVN-AM, Columbus, Ohio.  He has also been heard during NBC Radio Network and Group W (Westinghouse) newscasts.  Currently, he is a frequent contributor as a news photographer for a regional online news service.

He is currently a member of the Screen Actors Guild-American Federation of Television and Radio Artists, Association for Education in Journalism and Mass Communication, and the Audio Engineering Society.