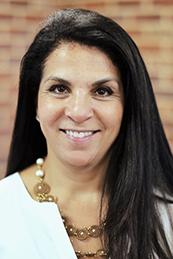 She is an award-winning producer with more than 20 years experience in broadcast news, working in an array of television markets – from local to international. She was an integral player in the launch of a state-wide news channel in Ohio and two news channels for a global broadcast network.

She helped to launch one of the first digitally integrated television programs, The Stream, recognized globally for innovation and in the U.S. cable television industry for its reporting on public affairs.

She is experienced in leading planning and assignments for news coverage of major stories and events. Hebah is best known for her successes as an interview producer, recruiting and developing guest talent and landing exclusive interviews with key sources and world leaders.

She has received an Emmy Award as an assignment producer and in 2011, contributed to news coverage of the Arab Spring that merited a Peabody Award. During her tenure on The Stream, the program received an Emmy nomination, the Royal Television Society Award for Most Innovative Program, the Gracie Award for Outstanding News Talk Show, and Webby People’s Choice Award for News and Politics Series.

She has been invited to share her experiences and expertise as a guest speaker at conferences, events and university classrooms around the world. Hebah is a member of the Dean’s Advisory Council at Ohio University’s Scripps School of Communication where she advises on curricula and education strategy.