Funding for roadway infrastructure is declining, while economic development increases roadway use and demand. This impact, along with the changing mission of facilities and aging infrastructure, requires new technology, materials, and construction techniques accompanied by additional training to sustain the county infrastructure system. The Southern Ohio Low Volume Experimental Road (SOLVER) is designed to help address these issues by providing a place to test new materials and construction methods with the potential for reducing lifetime costs and/or increasing durability.

SOLVER will provide the Ohio Department of Transportation (ODOT) with the test and performance data needed to develop cost-effective procedures, specifications, and strategies to help preserve the low-volume transportation network and move from a reactive to preventative maintenance strategy. The data will help ODOT’s pavement maintenance program become more efficient, enabling Ohio to build the best roads in the region while saving money and supporting additional work.

SOLVER’s mainline segment was rebuilt in 2016 and the additional segment constructed in 2017. The average daily traffic on the SOLVER is 3980 vehicles (low-volume is defined as less than 6000) with about 9% (360) being trucks. The speed limit on the SOLVER is 55 mph (88 km/h). The lanes throughout are 12 ft wide with 4 ft wide shoulders.

After the first two phases, the concrete in the original lanes used in phase one could be recycled into material for a new base. Other experimental materials and construction methods will be considered for evaluation in future phases.

Phase 1 Description and Build Up

Phase 1 of the SOLVER involved rehabilitating the existing pavement on US Route 50 using a standard ODOT Item 441 AC overlay as a control, while other sections have a SAMI (Stress Absorbing Membrane Interlayer) using either sprayed-on VRAM (Void Reducing Asphalt Membrane) or chip seal; various overlay options using ODOT Item 442 with a modified gradation; open graded friction course (OGFC) with and without winterpave additive; high RAP mixes with rejuvenator; and thinlay. Phase 1 was paved and then opened to traffic in October 2016. OGFC surface layers on Sections 1-4 and 1-5 were replaced by ODOT Item 690 Thinlay with Rejuvenator A on July 19, 2018, during Phase 2 construction, since some of the OGFC became prematurely distressed.

The objectives for Phase 1 of SOLVER include: 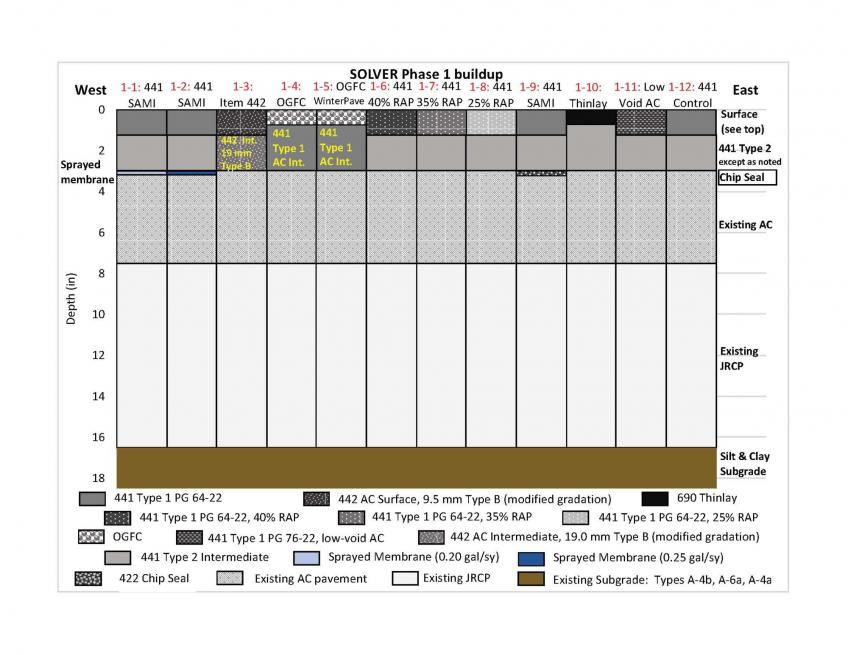 Phase 2 Description and Build Up

Phase 2 features construction of additional new lanes adjacent and to the north of the existing lanes, on the east end of project. Then, traffic is shifted to the new lanes. There is a greater focus on sustainability and on the use of reclaimed asphalt pavement (RAP). The problem with RAP is that the binder has aged and is more susceptible to fatigue cracking, thermal damage, and other problems. One proposed solution is to add a chemical rejuvenator to the RAP that softens the binder and reverses the aging effects. At this time, there is inadequate information on the performance and effectiveness of these rejuvenators, and evaluating them is a priority in Phase 2. Ground was broken for Phase 2 on July 6, 2017, and the road segment was opened to traffic on August 29, 2018. A weather station and weigh-in-motion sensors were installed at the east end of the project.

The objectives for Phase 2 of SOLVER include: 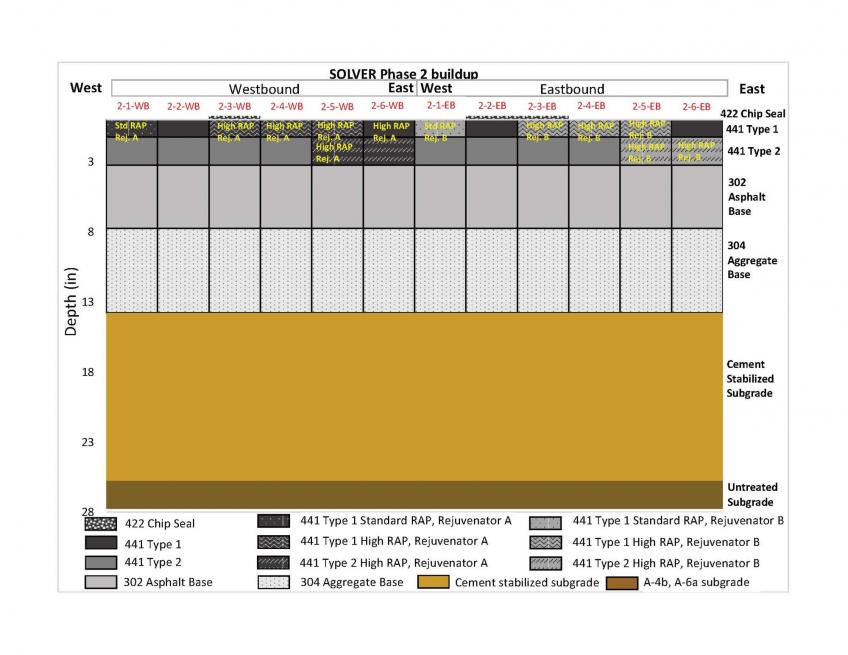 After the first two phases, the concrete in the original lanes used in Phase 1 could be recycled into material for a new base (ODOT Item 304, 305, and/or RCC base). Other experimental materials and construction methods will be considered for evaluation in future phases.

Short term benefits of the SOLVER include improved design procedures and construction specifications, training for ODOT and local personnel, knowledge of the effects of various preventative maintenance treatments on performance, texture and skid, and evaluation results on pipes and other drainage structures. Potential long term benefits include increased use of recycled materials on low volume and high volume roads, how to select and utilize rejuvenators with reclaimed asphalt, improved pavement drainage systems, evaluation of techniques to delay or prevent reflective cracking, and validation of completed research.

Some results from the SOLVER may have implications for higher volume roadways as well, for example, the effect of rejuvenators on the aged asphalt in RAP, or impact of moisture on chemically stabilized subgrade.

Before building the SOLVER, US Route 50 in that area consisted of an asphalt concrete (AC) overlay that had been placed on a 9 in (229 mm) jointed reinforced concrete pavement (JRCP). Phase 1 of the SOLVER is built on the existing road, which has 4.5 in (114 mm) thick layer remaining of the asphalt overlay. On top of the existing road, 1.75 in (44 mm) to 2.25 in (57 mm) of an intermediate asphalt layer of ODOT Item 441 Type 2 in most sections, but in two of the twelve sections Item 441 Type 1 Intermediate Course was used and a third section used Item 442 Intermediate Course with ¾ in (19 mm) aggregate. For more details, see the SOLVER Phase 1 Buildup figure. Two sections had a sprayed membrane applied before placing the 441 Type 2 layer, and a third had a fine layer of chip seal placed first. The surface treatments were different for each section, and included Open Graded Friction Course (OGFC) with and without WinterPave, Item 690 AC Thinlay, Item 690 Low Void AC, Item 442 AC Surface Course with modified aggregate gradation, and several varieties of Item 441 AC Surface Course, which included Stress Absorbing Membrane Interlayer (SAMI), 25% Reclaimed Asphalt Pavement (RAP), 35% RAP, 40% RAP, and one section with a standard Item 441 Surface Course to serve as a control.

Phase two of the SOLVER was new construction, and was build up from the native subgrade soil, which was mostly AASHTO Class A-4b silt, A-6a silt and clay, or A-4a sandy silt. The top 12 in (305 mm) of the subgrade was stabilized with cement, on top of which was placed 6 in (152 mm) of ODOT Item 304 Dense Graded Aggregate Base and 4.5 inches (114 mm) of Item 302 Asphalt Base. The top two layers varied by section, as shown in the SOLVER “Phase 2 Buildup” figure. There are six sections in each direction. The intermediate layer consists of 4.5 in (114 mm) Item 441 Type 2 with a maximum of 35% Recycled Asphalt Pavement (RAP) and no rejuvenator, except Sections 5 and 6 in the Westbound direction have high RAP content and use Rejuvenator A, and Sections 5 and 6 in the Eastbound directions have high RAP content and use Rejuvenator B. The surface course consists of 2 in (51 mm) of Item 441 AC, but with varying amounts of RAP content (standard (<20%) and high) and some of the standard RAP and all the high RAP sections use one of the rejuvenators, as indicated in the buildup figure. Additionally, three sections have a chip seal surface applied.

There are many tools employed to measure the performance of the test section pavements, including those provided by the Ohio University Mobile Civil Infrastructure Laboratory (OUMCIL) to conduct full QA/QC testing on site. Field data are collected using falling weight deflectometer (FWD), light weight deflectometer (LWD), dynamic cone penetrometer (DCP), ground penetrating radar (GPR), and portable seismic properties analyzer (PSPA). Loose sample and core specimens are collected for laboratory testing in the OUMCIL or at remote laboratory facilities to assess mechanical properties of the material and to characterize the asphalt binder. Long term performance is monitored via distress surveys, skid number determinations, back calculated modulus (only), collection of surface images, and measurements of rut depth and ride quality. The frequency of testing ranges from tests that are performed only once during construction, or at the time of construction and at different intervals after construction as deemed necessary.

The laboratory and field testing programs were designed not only to collect data to address the objectives but also to anticipate the data needed for future objectives and for offices in ODOT other than Materials Management and Pavement Engineering.

The state of Ohio made significant progress in the design and construction of interstates and major roads in the past two decades. Crucial to that success were test roads, including the Strategic Highway Research Program (SHRP) test road on US Route 23 in Delaware County, and the WAY-30 project on US Route 30 in Wayne County. Many experiments were conducted on these roads using different materials and methods, which produced results that helped us better understand the pavement behavior and enabled improved design and construction of major highways. The low-volume test road will employ the same approach to improving Ohio’s low-volume road network, which makes up over three-fourths of Ohio’s roads.

The SOLVER grew out of discussions with local and state agencies about the needs to understand low-volume road performance. ORITE and the County Engineers Association of Ohio held a workshop on April 28, 2015, in Newark, Ohio, for county engineers, city engineers, ODOT personnel, consultants, and construction contractors from across the state. At the end of the workshop, a research initiative was anticipated. Subsequent meetings and discussions with ODOT leadership concluded that a low-volume experimental road would benefit ODOT and local agencies. With assistance from Ohio University, ODOT developed a low-volume road research matrix to evaluate the performance of various mixes, materials, construction processes, and maintenance options.