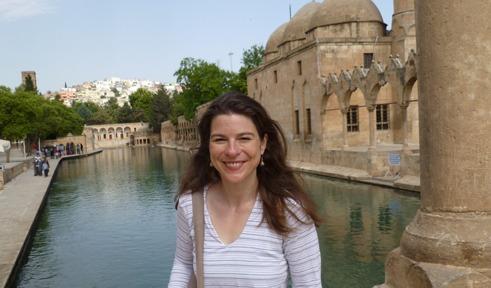 Jaclyn Maxwell is Associate Professor and Chair of the Curriculum Committee in the Department of History. Her research focuses on the important religious and social changes that took place during the later Roman Empire (the fourth to sixth centuries C.E.), when Christianity gradually became the dominant religion of the Mediterranean world. Her current research is focused on the attitudes of the educated elite toward ordinary people and the extent to which the transition from a pagan to a Christian society affected this. She has received fellowships from the American Council of Learned Societies, the National Endowment for the Humanities, and Dumbarton Oaks. She has participated in archaeological excavations in Syria and Italy, making technical drawings.

Jaclyn Maxwell’s first book, Christianization and Communication: John Chrysostom and Lay Christians in Antioch (Cambridge University Press, 2006), examines the social context of late antique sermons and how they can be used to better understand how the experience and worldviews of ordinary people during the Christianization of the Roman Empire. Her second book, Simplicity and Humility in Late Antique Christian Thought: Elites and the Challenges of Apostolic Life (Cambridge University Press, 2021) discusses how the social values of upper-class Christians in Late Antiquity often contrasted with the modest backgrounds of their religion's founders – the apostles – and the virtues they exemplified. Using examples from Greek Christian writers, this book examines attitudes toward the apostles' status as manual workers and their virtues of simplicity and humility.

During the summer of 2011, she was invited by Smithsonian Journeys to work as a "study leader" for a two-week trip to eastern Turkey: "Ancient Worlds of Anatolia." She presented lectures on history, archaeology and religion related to the cities and archaeological sites visited on the trip. (Read her blog post.) She led another trip to the Greek islands and the western coast of Turkey in Fall 2014 and Spring 2015.

In History, Maxwell's courses include:

All of these courses are designed to provide an overview of historical developments in antiquity, as well as in-depth analyses of selected ancient texts that introduce students directly to the culture and mentality of the time period.

In Classics & World Religions, her courses include:

All of these courses examine multiple religious traditions and emphasize the importance of studying religious beliefs and practices within a broader historical context.

In Spring 2016 and 2016, she took a group of Ohio University undergraduates to Rome for a study abroad program called "Eternal Rome: Piety and Power," which centered on a 1-week trip to Rome during Spring Break.