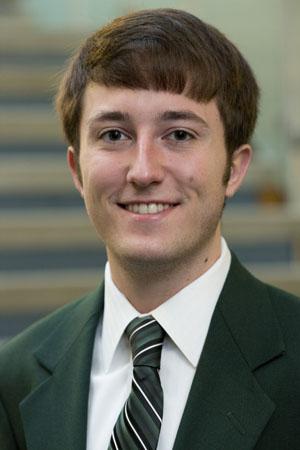 Ben started his career at Ohio University in Fall 2010. He entered as an Industrial and Systems Engineer due to his mathematical and scientific prowess as well as his passion for psychology and working with others. Ben is still following the ISE path today, concentrating in Supply Chain Management with interests in working in several different industries.

In addition to his studies, Ben is heavily involved in student organizations within the Russ College, in addition to the Engineering Ambassadors. Ben served as the President of the Institute of Industrial Engineers during the 2012-13 academic year and now serves as the group's Membership Director. He is also a member of the Robe Leadership Institute. Outside of the Russ College, Ben is an active member of the Students for Liberty chapter on campus.

Outside of the academic realm, Ben is an avid fan of listening to and playing music. He has been playing the drums since eighth grade and plays the drums back in his home town in a three-piece indie rock band called Twelve On The High. The group just released a brand new EP on November 1, 2013 which can be downloaded online for free at twelveonthehigh.bandcamp.com.