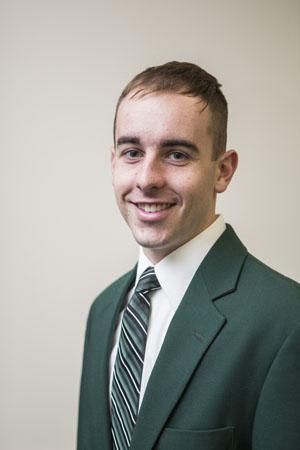 Ross started off as a mechanical engineering major, but after his freshman year, he decided to transfer to engineering technology and management (ETM). He loves working with his hands and being a part of projects that require problem solving, so he found ETM to be a perfect fit for him.

In addition to the Engineering Ambassadors, Ross is also involved in the Russ College Academic Honors Council and Army ROTC. He is currently the battalion commander, which means he is in charge of nearly 150 cadets who are a part of the Bobcat Battalion. He is also the officer-in-charge for the battalion’s color guard, which can be seen at OHIO football games marching out on the field with the U.S. flag.

After graduation, he will be commissioned as a second lieutenant in the U.S. Army, and he hopes to become a medevac pilot stationed at Fort Campbell as part of the 101stAirborne Division.

Outside of school, he loves playing guitar in his band. His favorite band is AC/DC, but he’ll listen to anything because of his love of music.