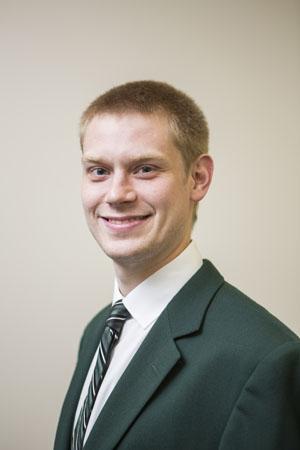 Justin started at Ohio University in the Mechanical Engineering (ME) program. He was strongly influenced by his father, who is also an engineer, and by a high school physics teacher. His mother and cousin both attended OHIO and spoke nothing but praise for the university. Today, Justin continues his studies in ME with a strong interest in automotive engineering, as well as machine design.

Justin has held several internships with Honda R&D Americas, Inc. He worked as a chassis designer and, more recently, as a steering and handling test engineer.

Justin is an active member in several campus organizations. He is a member of both Tau Beta Pi and Pi Tau Sigma. He also serves as a learning community leader and was involved in 3-D printing and robotics research during the 2013-2014 school year.

Outside of academics, Justin enjoys playing the saxophone and racing his 2001 Honda Prelude Type SH. He enjoys time with his friends, family, girlfriend, and his new puppy.