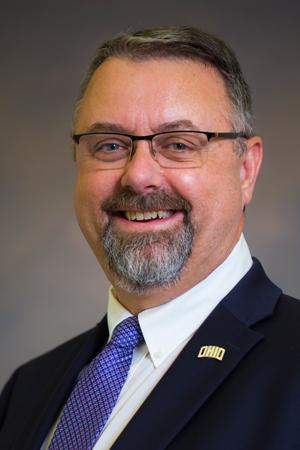 Since joining Ohio University in 1999, Scott Miller has focused on building strong relationships with industry, government, and nonprofit partners to shape and implement programs that elevate and enhance Ohio University’s research and teaching profile. Miller currently serves as the Russ College’s point person on industry attraction at the Russ Research Center in Beavercreek, Ohio, near Dayton. The 60-acre research and commercialization park, part of the $124 million Russ gift to the Russ College, , houses industry partners focused on aerospace and aviation, cybersecurity, advanced materials, digital manufacturing, and autonomous vehicles.

Prior to joining the Russ College in 2016, Miller worked for nineteen years at OHIO’s Voinovich School of Leadership and Public Affairs, where he formed and directed an applied research unit called the Consortium for Energy, Economics and the Environment (CE3). Through his leadership, CE3 brought together more than forty researchers from across five colleges to bring an interdisciplinary approach to issues ranging from watershed management, to climate change policy, to the economic and social implications of shifting energy generation in the Appalachian basin.

A National Energy Executive through the U.S. Department of Energy’s National Renewable Energy Laboratory in Golden, Colorado, Miller currently serves as OHIO’s primary point of contact for the Indiana Innovation Institute (IN3), and on the OHIO’s Corporate Engagement Task Force to improve industry-university relations. Formerly, he served as board chair for the University Clean Energy Alliance of Ohio, served as the principle program manager for the State of Ohio’s Climate Change Action Plan, and was named by Crain’s Magazine as one of the eighteen most influential people in Ohio’s Utica Shale Play.