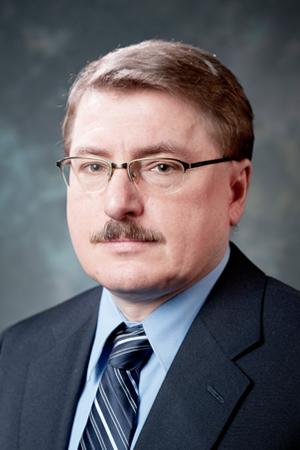 Wojciech Jadwisienczak hails from Torun, Poland, and joined Ohio University in 1996. Since 2001, he has taught with the School of Electrical Engineering and Computer Science in the Russ College of Engineering and Technology. His primary research focuses on fundamental properties and applications of semiconductors for optoelectronics, spintronics and photovoltaics. Specifically, he is involved with spectroscopy of semiconductors doped with lanthanides. His other research interests include nanophotonics, spintronics, and materials and devices for deep-UV light generation and applications. He advises a group of research students working on independent projects sponsored by the NSF, AFOSR and ARO. His advisees received the Fulbright (2007) and DoD (2011) Fellowships in the past. He has published more than 50 scientific papers cited more than 800 times. He is a member of the American Physical Society, Materials Research Society, and Optical Society of America.