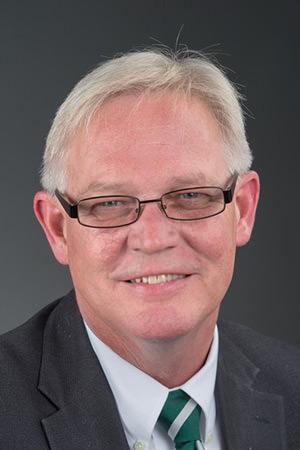 An Ohio University faculty member since 1987, Dennis Irwin was dean of the Russ College of Engineering and Technology from 2002 until 2019. During that time, he also was also Moss Professor of Engineering Education, which is held by the standing dean of the College during his or her tenure. During his tenure, he facilitated the largest charitable gift ever given to a public engineering college: a $124 million bequest from the estate of Fritz and Dolores Russ. He also developed the initial vision for the Academic & Research Center; and has led the development of a doctoral program in civil engineering, two new master’s degrees, three online master’s degrees in several disciplines, and a unique fundamentals initiative to equip engineers and technologists of the future with tailored foundational instruction. He was also instrumental in bringing the world’s premiere space education program, International Space University, to Ohio University and serving as chief host for its Summer Space Studies Program 2015.

Prior to becoming dean, he chaired the Russ College’s School of Electrical Engineering and Computer Science for five years. He was selected as the school's Outstanding Graduate Instructor and Outstanding Undergraduate Instructor three times each. From 2001 to 2002, he held the Neil D. and Bernice E. Thomas Professorship in Engineering in honor of his outstanding teaching abilities and rapport with students as well as achievements in the electrical engineering profession. Irwin previously worked for Logicon Control Dynamics Company in Huntsville, Alabama, as a program manager for projects sponsored by NASA, the United States Air Force, and the United States Army.

A registered professional engineer in the state of Ohio, Irwin is also a faculty member of the International Space University. He has chaired the space systems engineering department three times, and has served as a lecturer or workshop leader since 1998. He is recognized in Who's Who in the World, Who's Who in America, and Who's Who in Science and Engineering. In May 2001, NASA Glenn Research Center awarded him the honor of Excellence in Project Management for his work on the Advanced Communications Technology Satellite. He currently serves on the nomination committee for the National Academy of Engineering’s Russ Prize, the world’s highest honor in bioengineering. During 2015-2016 he served as president of the Ohio Society Professional Engineers, where he has received numerous awards for engineering management, engineering leadership, and conference organizing. He is a fellow of the National Society of Professional Engineers, where he currently serves on the Board of Directors and the House of Delegates, an associate fellow of AIAA, and senior member of IEEE. He is also a public member of the Ohio General Assembly’s Ohio Aerospace and Aviation Technical Committee.

He has received research sponsorship from agencies such as NASA, the U.S. Air Force and the U.S. Department of Education, for which he served as the U.S. principal investigator for a joint grant from the European Union and the United States.

He is the author or co-author of 40 articles and 15 technical reports and has given numerous national and international presentations in the areas of flexible structure control and the use of remotely accessible laboratories for research and educational purposes.