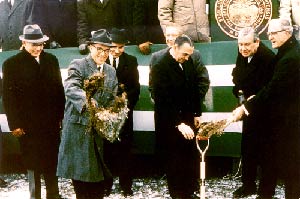 After graduating from St. Clairsville High School, Mr. Furbee worked as a court clerk for Judge J. Nichols, who along with others encouraged Austin to attend law school. Upon graduation from the University of Cincinnati Law School he returned to Belmont County and became a partner in the law firm of Thornburg and Thornburg, later to become the Thornburg-Furbee Law Firm.

Austin was extremely active in community organizations including the First Presbyterian Church of St. Clairsville; he was a founding member of the Saints Club and served as a Belmont County Commissioner. While serving as a commissioner, Austin's commitment to the educational needs of youth residing in the Ohio Valley grew. He was very aware that there were limited opportunities for higher education. Austin was instrumental in the commission's acquisition of the former Belmont County Experiment Station farmland, which was to become Ohio University Eastern Campus. Austin was also active in his support of technical and vocational education.

Mr. Furbee's involvement with Ohio University grew throughout the years. For many years he served as a member of the Ohio University Eastern Campus Regional Coordinating Council. The years he served as chairman of the Coordinating Council included the groundbreaking for the new campus and the dedication ceremony of Shannon Hall, the first new campus building.

As a Regional Coordinating Council leader, Austin Furbee worked tirelessly on behalf of the residents of Belmont, Monroe and Harrison counties to increase access to higher education academic programs.