A Passion for Sustainability 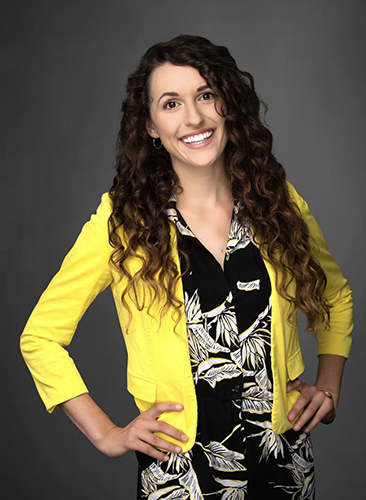 Alex Slaymaker found her passion for sustainability work while growing up near Lake Erie on the west side of Cleveland. While she spent a lot of time by the lake, she was often told she shouldn't swim there because of how bad the pollution was by the shore.

"I realized as a teenager that the pollution was caused by humans, and it was totally avoidable," Slaymaker said. "I was super frustrated and confused, and wondered what it would take to have water so clean in Lake Erie that we could safely drink it."

In 2010, Slaymaker came to Ohio University. She graduated in 2014 with a degree in environmental planning and policy through the specialized studies program. Along the way, her work as a Voinovich Scholar and a variety of other projects, including OHIO’s first climate action plan, helped her get to where she is today – the sustainability initiative head of Smart Columbus.

At the Voinovich School, Slaymaker worked on the Appalachia Zero Waste Initiative with Rural Action and pitched a new Zero Waste Initiative for OHIO. Her mentors included Scott Miller and Geff Dabelko – who encouraged Slaymaker to write an article for the Bulletin of the Atomic Scientists competition about infrastructure resilience and climate refugees, which she won.

"The only reason I thought to submit was because of Dr. Dabelko's support, so I can't speak highly enough of the staff and faculty at the Voinovich School," Slaymaker said.

As a sophomore, Slaymaker applied to help with the Climate Action Plan for OHIO, despite having no direct experience. She was surprised to be selected, and even led a subcommittee focused on sustainable buildings.

"It was really a life-changing moment because I made connections with Dr. Buckley, who ended up being that mentor for me, and other staff across the University, too," Slaymaker said. "It was just really empowering to feel like I could actually do something although I was only around 19 at that point."

Slaymaker noted she was treated as an equal on the project among professors despite her comparative lack of experience. "[I learned] to believe in people who believe in me, [to gain] that sense of empowerment that I can make a difference in the field,” Slaymaker said.

Slaymaker continued her studies at Arizona State University and received a Master's in Sustainable Solutions. There, she worked on projects across the country and even in Europe involving urban design, urban agriculture, circular economy, business sustainability, and more

"It was a really phenomenal experience to learn more about the climate crisis, because the core theme I was focused on," Slaymaker said. "It really is a big justice and equity issue."

Slaymaker said she was intrigued by the Smart Columbus initiative from the moment she heard about it. It started back in 2016 when Columbus won the Department of Transportation's smart cities challenge and secured $40 million to create smart mobility innovation pilots around electrical vehicle adoption decarbonization, to improve Columbus citizens’ quality of life.

"We can't tackle the climate crisis or equity without transforming how we move goods and people," Slaymaker said. "It really changed the conversation around equity and mobility across sectors and lastly elevated the reputation of Columbus globally, which is really cool.”

Slaymaker joined Smart Columbus in 2018 as a smart mobility adaption manager. She then was promoted to the head of the Sustainability Initiative, a project that works with the public and private sectors to create transportation initiatives that are better for the environment.

"I feel like my responsibility as someone who comes from a place of privilege is to give back to the state that raised me and help build a more prosperous region for everyone," Slaymaker said.

Ready to pursue your passion in sustainability? Learn more about the Voinovich School’s new Master of Sustainability, Security, and Resilience, a fully online, part-time program that equips working professionals with specific skills and hands-on experience to lead planning, policy, and communication in the face of rapid environmental change.