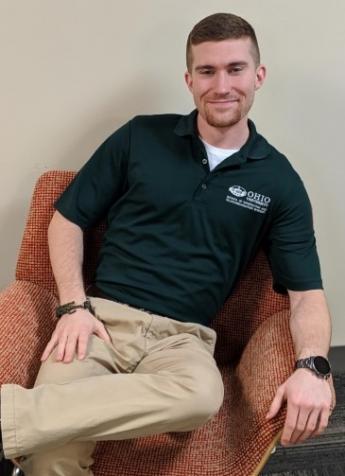 The McClure ITS program boasts a curriculum dedicated to the professional development of its students in the IT industry. Graduating senior Jordan Pearson is a prime example of this dedication.

Pearson is an undergrad student in the ITS program from Columbus, Ohio. Before coming to Ohio University, he was undecided on his major/career focus. However, after conversations with former McClure undergrad director, Philip Campbell, he decided to major in ITS. He is now a well-rounded student focusing not only on his business minor, but his two concentrations: Communications and Marketing.

“I think ITS is diverse. It covers a variety of different topics in IT and lets you focus in on what you want out of the field of IT,” said Pearson. “If you want to focus on strategy, we have policy and strategy courses. If you want to be more technical, we have VOIP and encryption.”

Pearson has taken time throughout his undergrad time to work on several projects both in and out of the classroom. Most notable is his work on the Accenture Challenge, an academic assignment which he will present with his team members as part of ITS Day 2019.

Jordan has also taken advantage of the opportunity to gain valuable experience as a student employee in the Career and Leadership Development Center.

“I give public, hour long workshops on professional development topics such as team development, resumes and interview techniques,” said Pearson. “I also hold mock interviews with students which helps develop their interview skills and may even qualify for class credit.”

Professional development is not just something that Pearson gives to others, he has received a significant amount himself. Pearson had an IT internship with Marathon Petroleum, last Summer.

“I interned in one of the refineries for the company where I worked on a number of different tasks such as configuring a time server and newly installed routers, an application for a team space and several other significant things,” said Pearson. “The knowledge I acquired in courses in the ITS program such as data networking actually helped me during my time at Marathon.”

Pearson used all his knowledge and experience in and out of the program to land his future position as a consultant at HMB. Ultimately, he has effectively used all his resources to gain full time employment. Congratulations, Jordan Pearson!