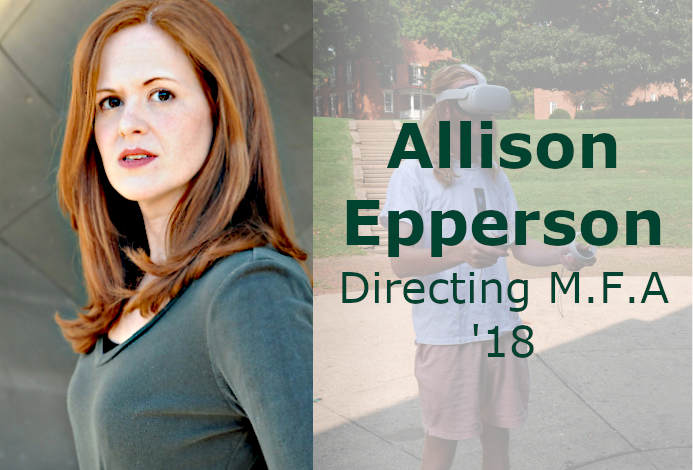 Allison Epperson returns to Ohio University (OU) after an extensive acting and directing career to work for the J. Warren McClure School of Emerging Technologies. In August 2021, she started as a producer for the Medicaid Simulation Project (MSP). Epperson graduated from OU in 2018 with a M.F.A in Directing.

After completing her undergraduate studies at the University of Oklahoma with a B.F.A in performance, Epperson spent over 10 years as a tour actress for the International Tour Project of Missoula Children’s Theater (MCT). She traveled to cities throughout the United States, Canada, Mexico, and Europe, conducting auditions, rehearsing and performing fairytale musicals with children from military families for 40 weeks every year.

After her time with MCT, Epperson and her husband, who also acted and toured with her, decided to expand their directing skills at OU. During her time in the graduate program at OU, Epperson collaborated with designers, actors, writers, and technicians. She got to meet and work with Matt and Carrie Love, now production managers at the GRID Lab, who invited her to work on the MSP project after she spent three years working in Atlanta, GA.

In Atlanta, Epperson was a freelancer, working as an Intimacy Coordinator for Center Stage North and in the box office at the Fox Theater. During her time with Center Stage, Epperson used her directing skills when working with actors to choreograph intimate scenes. She explains handling these types of scenes in the same way one should approach fighting or dancing scenes.

“[Intimate scenes] should be choreographed and repeatable and within whatever your boundaries as a performer are. Respected at all times,” Epperson said. Her experience with intimacy coordinating has now translated to her production role for MSP.

Elderly abuse, LGBTQ+ and Intimate partner violence (ELI) is an integral part of the Medicaid Simulation Project which is designed for OU students in healthcare fields. ELI has combined virtual reality and short film storytelling to educate students on the difficulties those of different populations experience when navigating the medical and social systems.

The immersive experience recreates certain aspects of real people’s experiences, showcasing negative ways doctors and healthcare workers react to patient’s struggles whether that be addiction or access to resources.

The idea is that with virtual reality simulation, students will be virtually transported to patients’ daily lives in an effort to become more empathetic and aware of different circumstances in future healthcare professions. As a producer, Epperson says she scouts talent, set locations, makes sure production is COVID-19 compliant. She also arranges for transportation, housing, and pay for the actors involved.

Epperson says she works diligently on appropriate casting and scriptwriting, so stories are told and represented accurately.

“It’s important to have a variety of different experiences in the room to help shape [characters] and to be listening to those voices… to make sure that underrepresented voices are heard in these stories,” she said.

Because the ELI project is creating VR films containing sensitive topics, such as elderly and intimate partner abuse, Epperson says that it is vital to the performers and viewers that scenes are shot to tell truth, instead of sensationalizing the severity of abuse.

During her time as an Intimacy Coordinator, Epperson often staged assault scenes for a theater setting, which requires an awareness of movement, non-verbal signals, and communication between actors and making script adjustments based on safety. ELI also collaborates with professionals in different medical fields to be certain content is reflective of real-life medical scenarios.

A new film ELI is creating explains the experience of Dre, a middle-aged, assigned female at birth, non-binary identifying BIPOC attempting to get pregnant. One of the scenes recreates an examination at a gynecology visit in which a patient would have their feet in stirrups. Epperson explained this is a very vulnerable situation to experience and film and many ques must be used to convey the uncomfortable nature of this type of examination.

In this particular instance, staff members at the gynecology office were utilized on set to accurately portray the procedures and behaviors of doctors in a real-life examination. ELI relies heavily on collaboration to illustrate accurate healthcare situations and characters.

ELI has also collaborated with Equitas Health, an online counseling service that offers guidance to members of the LGBTQ+ community on how to navigate quality, affordable, and guaranteed healthcare options. Equitas has helped perfect ELI scripts and content to continuously monitor the everchanging experience of LGBTQ+ members in healthcare.

Epperson discusses how vital it is to create accurate representations and stories that give the audience a true understanding of what patients experience.

“If you are using virtual reality for a purpose… to teach, to instruct, to make better, how can you go wrong,” Epperson said.

With such a deep understanding of directing and producing, Epperson is able to apply her abilities with ELI to produce meaningful VR experiences that truly benefit the next generation of healthcare workers and disadvantaged populations in Ohio and beyond.

“It is great when creativity and a worthwhile cause can converge and have meaning at the same time,” Epperson said. “It is just wonderful that I have found a place where I can be a part of that… to help a medical professional be better.”

Visit the MSP website which currently offers two VR training sessions, Diabetes in Appalachia and Living with Addiction, to learn more about the ELI project.