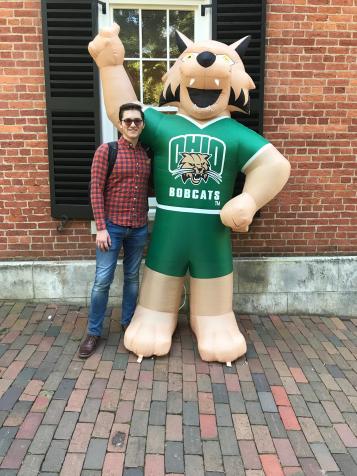 Logan Fondriest is a junior at Ohio University, with the majority of his focus in Virutal Reality. He is planning to be a VR major once the degree is approved, and is currently taking the theoretical class framework in preparation for it.

"If you put in a good amount of effort, you can really do whatever you want in ECT." said Fondriest.

Fondriest expressed interest in the GRID lab facilities as well.
"I just love production in all aspects." Fondriest said.
One audio concept that he is working closely on with Professor Chip Linscott is spatial audio. Spatial audio is audio that tracks your movement.
In addition, Fondriest is a member of Bobcat Esports, the student-based community dedicated to gaming. He's "dipped his toes" on a variety of different esport facets, such as commentating and management.

"Esports was a pleasant surprise." said Fondriest.
He commentated events for the organization, with the biggest one being the Staff vs. Student League of Legends match, where he had the opportunity to interview Ohio University's President, Duane Nellis.